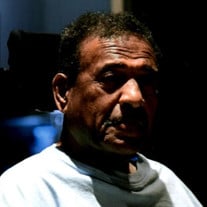 Mack’s Life Story William Henry Mack, Sr., affectionately known as “Mack” and “Coach Mack”, was born on Friday, August 15, 1947, in Chase City, Virginia to Garnett Mack (1912-1978) and Suzanna Gayle Mack (1911-1983). On the morning of Thursday, January 20, 2022, he peacefully transitioned to eternal life at the Washington, D.C. VA Medical Center. He spent most of his childhood in Washington, D.C with his mother and older brother, Roland. During the summer months, they would return to Chase City, VA to join with the rest of the family. He enjoyed going to the matinee to watch cowboy movies, so he’d work various jobs, including picking cotton, to earn money. He was a devoted Boy Scout. Another highlight of his trips back to his home state would be to attend their annual Virginia State Fair. In 1960, he enrolled in Anacostia High School in Southeast Washington, D.C., where he grew up. While there, he became a member of the Anacostia Indians’ basketball team, along with Curtis R. Perry, who went on to become a professional NBA power forward for the Milwaukee Bucks and the Phoenix Suns. His love of sports was so evident to those who knew him, so much so that he spent 32 years of involvement in youth football. In 1984, he became a part of the Kettering/Largo/Mitchellville Boys’ & Girls’ Club football program, eventually becoming the football commissioner, drawing young men from around the area into one of the winningest, well-respected programs in Prince George’s County. In later years, he founded the KLM Steelers Football/Cheer Programs. He was drafted into the United States Army, undergoing basic training in October 1966 at the Fort Benning Army Base in Fort Benning, Georgia, and became an Expert Marksman. He was deployed to Vietnam from 1966 through 1968 and was awarded several purple hearts during those years. He was one of the first veterans to use the G.I. Bill to attend Southeastern University from 1968 through 1972, earning a degree in Business Administration/Accounting. As a result, Mack built a successful accounting practice as a tax preparer to an impressive roster of clients, including many in the music industry. In addition, since 1989, he was the owner of BHM Contractors, Inc., a firm that specializes in storm drain management, boarding up and maintenance of over 3,500 houses in the county, and maintaining properties under the Marion Barry administration in Washington, D.C. From 2003 through 2012, he was appointed as an Alcoholic Beverage Inspector for Prince George’s County, Md. Mack was involved in assisting many campaigns in delivery of Thanksgiving and Christmas baskets to those in need. In 1972, Mack met the love of his life, the former Bobbie Sue Cummings, while employed at the Washington Gas Light Company. On Valentine's Day of 1976, they were wed in holy matrimony (forty-five years of marriage and not one day of regret). In August of 1978, they were blessed with the birth of their son, William Henry Mack, Jr., affectionately known as “Billy”. Mack had such a special and enduring love for his family. There are so many fond memories of him throughout the years. A great example is that, each Christmas, Bobbie’s younger siblings eagerly awaited his arrival with silver dollars for all! His beloved mother-in-law, the late Eula M. Cummings, could always count on him to bring her cases of Pepsi, her favorite soft drink. William Henry Mack, Sr. was the youngest brother to Wray Mannie Mack, Dr. Garnett Mack, Beatrice Mack, Louise Mack, Toyee Mack, Tommie Mack and Roland Mack (Jean), who all preceded him in death. He leaves to cherish his memories, his beloved wife of 45 years, Bobbie S. Mack his son, William H. Mack, Jr., his grandson Sir William H. Mack, III, special nieces Melinda Mack and Alice Chamberlain, special nephews Roland and Kevin Mack, a host of other nieces, nephews, relatives and friends, along with his dearest longtime friend, Rev. Robert Holliday.

The family of Mr. William Henry Mack, Sr. created this Life Tributes page to make it easy to share your memories.