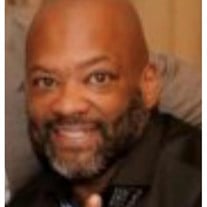 On April 21, 2021, our Heavenly Father called Sean Maurice Slaughter to His eternal home. Sean was born November 25, 1967 to Myra Williams and the late Larry Slaughter in Washington, DC. Sean was smart, highly ambitious and self-motivated. He graduated from Spingarn High School in Washington, DC and from there attended Lincoln Technical School, where he studied HVAC. Sean worked for several companies utilizing his skills he learned at Lincoln Technical School, before landing the job at the Government Publishing Office in Washington, DC as a Pipefitter. He was a hard worker and he knew his stuff. He was a natural born leader and was always willing to learn so that he could pass on his knowledge to others. Sean was a jokester, but he also had a serious side as well. Sean belonged to a group called “The Traveling Saints”. They fed the homeless, donated clothing items, organized coat drives, and hosted cabarets. He loved traveling with his wife to Jamaica, Cancun, and Aruba. Sean also liked to grill and would often videotape himself grilling then send it to co-workers to show off his skills. On January 15, 1999, Sean married Alita Slaughter and from this union Brianna and Sean were born. Sean loved his family very much, and a lot of his younger cousins looked up to him. Sean leaves to cherish his memories his wife Alita; his daughter Brianna; his son, Sean; his granddaughter, Aria; his mother, Myra; his brothers, Marcus, Larry S., William, and Larry W; three sisters-in-law, Mia, Inez, and Ebony; his brother-in-law Renaud; his favorite aunt Sharon; his best friend, Darrian (Man); his mother-in-law, Audrey; many nieces, nephews, cousins and friends.

On April 21, 2021, our Heavenly Father called Sean Maurice Slaughter to His eternal home. Sean was born November 25, 1967 to Myra Williams and the late Larry Slaughter in Washington, DC. Sean was smart, highly ambitious and self-motivated. He... View Obituary & Service Information

The family of Mr. Sean Maurice Slaughter, Sr. created this Life Tributes page to make it easy to share your memories.