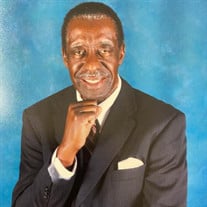 Samuel Ridley was born May 30, 1939 in Weedowee, Alabama to the late Rev. Burdett Ridley and Mary Samaria Ackles Ridley. He was called to eternal rest on April 16, 2022. In 1962, after being honorably discharged from the Army, Samuel relocated to DC. Shortly thereafter he met and married the love of his life, Lucille Fields, in 1964. From this union, four children were born – Wanda, Karen, Lorinda and Samuel Jr. Samuel availed himself of the various educational and professional opportunities in DC. He graduated from the Washington Technical Institute now UDC (University of the District of Columbia) with a degree in Architectural Engineering. After 26 years of federal government service, he retired from the Department of Defense as an Architectural Engineer/Security Manager. With a willingness to continue serving his country, Samuel enlisted in the DC Air National Guard 113th Fighter Wing Civil Engineering Squadron where he served with distinction until he retired as Master Sargent in 1995. Samuel’s love of higher learning extended to Christian education. He attended Washington Bible Seminary and graduated from Washington Bible College in 1993 with a B.S. in Systematic Theology. Growing up under Christian parents, Samuel came to know the work of the Lord at an early age at the Pleasant Hill Baptist Church in Delta, AL. Later in life, Samuel joined Rehobeth Baptist Church in Washington, DC where he was a faithful member for 50+ years. During this time, he became a licensed and ordained Minister after serving as an ordained Deacon for 12 years. He sang in the Male Chorus for 18 years and the Senior Choir (now Sanctuary Choir) for seven years. Samuel also taught Sunday School Adult classes for many years. The Gentle Giant was always ready to support the Pastor and Rehobeth in any capacity. Samuel was a loving and devoted husband, father, grandfather, neighbor and friend with a passion for watching football “Go Skins!”, jogging, handcrafting beautiful wooden pieces of furniture, doing home improvement projects, going creek and head boat fishing, bike riding through Hains Point and around the national monuments and gardening. Samuel leaves to cherish his memory, his loving and supportive wife of 58 years, Lucille; three daughters, Wanda, Karen and Lorinda; son, Samuel Jr.; five grandchildren, Kendra, India, Chauncey, R’Shaan and Ayana. He also leaves one Aunt, Mildred Ridley of Anniston, AL; one sister, Dorothy Ridley of Oxford, AL and one brother, Garnett Ridley of Anniston, AL.; and a host of dear nieces, nephews, cousins, friends, and his Church Family. Services will be livestreamed at 11:00 am on the website link: https://rbcdc.org/

Samuel Ridley was born May 30, 1939 in Weedowee, Alabama to the late Rev. Burdett Ridley and Mary Samaria Ackles Ridley. He was called to eternal rest on April 16, 2022. In 1962, after being honorably discharged from the Army, Samuel relocated... View Obituary & Service Information

The family of Rev. Samuel Ridley Sr created this Life Tributes page to make it easy to share your memories.