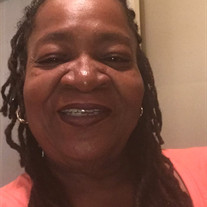 Reeni C. Gorham(Moody) 68, was born May 25, 1953 to her parents Lonnie Moody and Elma Jackson(Moody) in Washington, DC. Renee was the only child, but had bonus siblings(cousins) that helped fill the void. Reeni graduated from Wakefield High School in Arlington, VA and joined the workforce shortly after as a Secretary. Then that's where love would strike a fatal blow and put Cupid on her doorstep as her husband James D. Gorham. Reeni loved James with infinite love, patience and understanding. They were introduces by Reeni's mother Elma and have been inseparable for over 40 years. Reeni and James would go on to their one an only daughter Kimberly (Larry, Jayden, Kurt, Korey) who is an RN and Mortician. The bond that Reeni and Kimberly shared is something more precious than Gold. They were best friends and everyone knew it. After leaving the government, Reeni became a store manager for Avenue, Inc in 1990 where she dedicated over 10 years of her life and lastly ended up retiring from Healthcare as Sr. Billing Analyst for Falls Church Medical Center where she worked for over 20 years. She didn't bite her tongue and although she was short in stature she made up for it in strength and courage. You may not have liked the advice she gave with her bash bravado but you couldn't deny that she was going to be honest about how she felt. Reeni had unconditional love and laughter to give to all. She loved gambling, laughing eating seafood and being with her friends and family. Reene was a devoted grandmother to all three of her grandchildren. The love and laughter she shared with each one can and will never be duplicated. Her death grip(inside joke) will live on. She wanted them to always know that they were loved. Reeni didn't have much family, but the ones that meant the world to her is who captured her heart. Elise White(step sister), she loved you beyond the stars. Always know that her heart is with you!!! Irma Harris(Aunt) and Mark Harris(cousin), Maurice Harris(cousin), and Medina Harris(cousin) she loved you and called you a second mom to her. Reeni is survived by her loving and devoted husband James D. Gorham(Washington, DC), daughter Kimberly Bold(Larry Bolt), three grandchildren Jayden Gorham, Kurtland Elliott, II and Korey J. Elliott. Special Family Pop, Leon Jones(elma J. Moody), step sister Elise White(Washington, DC), a devoted aunt Irma Harris, cousins Mark Harris, Maurice Harris(deceased), Medina Harris(deceased). Sister in law Johnnie Gorham(Greenvilee, NC), brother in law Bobby Gorham(Charlotte Gorham, Greenville, NC). Special cousin: Patricia Taft, Neices: Angela Wooten, Cynthia Tyson, Jasmine Tyson, Kebori Gorham, Kamaron Staton. Nephews: Jerrell Gorham. The Crew: Jasper Pitt(Charlotte Pitt), Larry Nelson(Joyce Nelson), Dorothy Wilkes(Rufus Addison), Pudding, Betty Wilkes, jean Gorham she loved y'all so much!! My boo's Cassandra, Sharon, Kim and Ingrid she adored you!! Special Friend Teresa Randall(Larry) you were more of a friend than I could ever imagined. You got me through some tough times, and I will never forget the laughs, cries and everything in between. I love you all, don't cry for me!! Reeni out!!

Reeni C. Gorham(Moody) 68, was born May 25, 1953 to her parents Lonnie Moody and Elma Jackson(Moody) in Washington, DC. Renee was the only child, but had bonus siblings(cousins) that helped fill the void. Reeni graduated from Wakefield High... View Obituary & Service Information

The family of MRS REENI CASSANDRA GORHAM created this Life Tributes page to make it easy to share your memories.