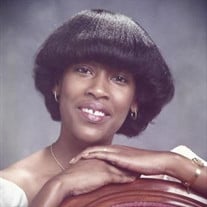 To those closest to her, Princetta was a loving and supportive wife, mother, sister, daughter and friend. She was devoted to her family, and would give anything but her last cigarette to anyone in need of a hand. Truly anointed with a cool calm maternal instint, throughout her family and friend circle, she could take any “crisis” situation and restore order with her practical, loving and never judging nature. She always made time to listen, encourage and reassure you that all would be alright. So effortlessly interjecting her advice whether solicited or not. If she didn’t have the answers, better believe she would search high and low until your problems were solved, which solidified her as a rock to the family. Princetta was born on October 27, 1957 to Channie & Hayward Green. She grew up in the Bronx, NY where her parents worked as a roofer and seamstress at the Imperial Coat Front Company. Princetta was Channie’s ‘righthand’. She was a protective and loving sibling who embraced the ‘momma-sister’ role with ease. At the age of 18, she relocated to Washington, DC and proudly served in the United States Air Force as a Chapel Administrator. After her military service, while working at the Cambridge Apartments in DC, she met the love of her life Robert E. Williams. Robert would go on to charm and woo her into what would become a 35-year union. The two were wed in the spring of 1986. They purchased their first home and planted roots in Forestville, MD. Soon after, their family of four became complete with the addition of their babygirl Candace “Missy” in 1988. Princetta and Robert made sure that Sucora “Abbey”, Robert “Chuck” and Candace grew up loving each other and visiting as much as possible in their early years. Princetta spent her years raising and pouring into her Missy, serving her community, and introducing as many people as she could to the wonderful world of couponing and boardgames. Despite being diagnosed with stage IV colon cancer in the summer of 2015, she never reflected what she was going through. With her Lord by her side and her perseverance she went on strong and determined to live a life filled with purpose and an abundance of love. She enjoyed frequent travel to New York, North Carolina and South Carolina to visit family, and the occasional cruise with her Missy. She and Robert had plans to travel and explore the US one road trip at a time, but God had another plan. Princetta surrendered all to her Lord Tuesday, October 19, 2021, at the age of 63. Princetta was preceded in death by her father Roosevelt “Hayward” Green and brother Bruce Green. She will be sorely missed and survived by her husband Robert E. Williams, daughter Candace Williams, step-daughter Sucora (Derrick) Anderson, step-son Robert “Chuck” Williams, Jr., surrogate daughter Ashley Garrison, mother Channie Coker, siblings William (Gloria) Walters, Laura (Brett) Johnson, Catherine “Cookie” Williams, Hazel Green, Andre Green, Marshall Sidney Green and Morningstar Davis. Her memory will be cherished by a host of aunts, uncles, nieces, nephews, cousins and friends.

To those closest to her, Princetta was a loving and supportive wife, mother, sister, daughter and friend. She was devoted to her family, and would give anything but her last cigarette to anyone in need of a hand. Truly anointed with a cool calm... View Obituary & Service Information

The family of Princetta Green-Williams created this Life Tributes page to make it easy to share your memories.

To those closest to her, Princetta was a loving and supportive...