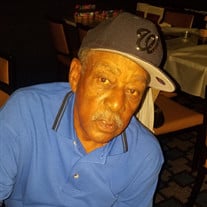 Percell was a dedicated husband, father, grandfather, brother, uncle, brother-in-law and friend. Percell was born June 23,1947 in Louisburg, NC to the late David Leon and Esther Jane Massenburg. He quietly transitioned into Glory on Wednesday, March 7, 2022. He was lovingly called “Mr. P” and “The Mayor of Apple Grove”. The “Mayor” touched the hearts of many families in the community. Percell attended Riverside Union School in Louisburg, NC. Shortly after that Percell arrived in DC and began his career with Giant Food as a Vending Machine Mechanic. He also worked part time for Thom McAn Shoes. After retirement from Giant, he joined the staff of Palumbo and Palumbo Law Firm. Percell was united in marriage to Sandra on May 27,1978 and from this union one child was born (Michael). Percell was a kind, loving and caring person. He loved listening to oldies but goodies-saying back in the day nobody could dance better than him, but now his feet won't let him dance. He took pride in claiming the Title of Mayor of Apple Grove and took his daily walks to patrol his territory. He took tremendous pride in helping neighbors and spent so much time expressing and offering guidance to the Young Adults in the community. He cherished his meetings with the Mature Adult Club (MAC). He also cherished his Friday night meetings with the RU Recovery at Independence Baptist Church. He loved his family, especially his grand children, often telling his wife to make sure they get what they want no matter the cost, He also shared a super bond with his dog “Bootz” who had his back and would often hide items to make him stay home. Percell was preceded in death by his parents; David Leon and Esther Jane Massenburg; brother, David C. Massenburg and nephew, Christopher Marcell Massenburg. Percell leaves to celebrate his life, his wife, Sandra, his son, Michael; 6 grandchildren: Michael, Mikela, Lauryn, Taylor, Tionna, and Skyla. A sister: Mary Cheek; brothers in law: Michael (Betty); Tommy (Theresa); Johnny (Wanda); Luther (Vicki), Ronnie (Nancy); and Melvin; sisters in law: Debbie, Linda, Pam, H. Louise, and Sarah, his nieces: Tawana, Renata, and Kiana: nephew: Pierre; and a host other of nieces, nephews, and friends. Devoted NC relatives Mary Alice, Charlie Jr, Bobby, Cornell and George Rainey. Special friends Alex McCall and Joseph Truesdale who he spoke to daily; his CB buddies that he end conversations by saying “Tripple 9, I’m Out”. We are confidant, I say and willing to be absent from the body is to be present with the Lord. II Corinthians 5:8

The family of Mr. Percell Massenburg created this Life Tributes page to make it easy to share your memories.