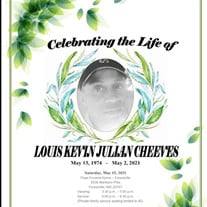 OBITUARY Louis Kevin Julian Cheeves, "b.k.a" Kevin, was born in Washington, D.C., on May 13, 1974 to Daisy Cheeves (Stokes) and Darryl Cheeves, Sr. He entered this world on that day as vibrantly as he lived each day thereafter. Kevin was educated in Washington, D.C. and received his G.E.D. at Keystone Job Corps in Drum, Pennsylvania. At the early age of about 11, Kevin began to show his great passion for music likely following the steps of his father. By age 13, Kevin had already begun making his own songs. Kevin was outgoing and loved to talk. Kevin was always the life of the party and well known in the neighborhood that he loved, Minnesota Avenue. Kevin worked in the Construction and Landscaping fields, he was employed at T.S.G. based in D.C. Kevin was a devoted father to eight children. Karisa Newkirk, Kylah Cheeves, Matthew Gross, and Jaylah Cheeves. In 2008, Kevin married Alberdina Cheeves. From that union came Nathaniel Cheeves, Connor Cheeves, Jibril Cheeves and Ysis Cheeves. Kevin often mentioned his love for his children in his songs, and there was nothing that he would not do for them. Kevin was deeply rooted in his music. The first group that Kevin was part of, Inna Madness, was with his best friend Nate, "a.k.a." Nay, Kenya, Black B, Sammy Bravo and Buggz. Kevin's music led him to work and perform in various places including New York, Texas, and North Carolina. Shortly after, known as "Flee Bag 202", Kevin began collaborating with CBAN, Flee Market Entertainment in pursuit of growing the brand. Kevin also worked closely with Smokey the Scientist and created musical masterpieces. Kevin had a heart of gold and always tried to help everyone. He touched so many lives and was loved by all! The bookmarked New Testament scripture in Kevin's bible, Rev. 2:26-29, gives us comfort in knowing that he understood the importance of solidifying his relationship with God in Heaven. Kevin transitioned this life on May 2, 2021 and was preceded in death by his loving and dear to his heart Mother, Daisy Cheeves, Brother, Darryl Cheeves and step-father, Michael Proctor. Kevin is survived by his father, Darryl Cheeves, Sr. (Delores). Kevin leaves behind to cherish his memory and carry on his legacy, his children, sisters, Tellisa Williams, Mia Deyo, Kia Deyo and Araina Proctor, brothers Timothy Stokes and Theo Gadson, niece Jasmine Thompson-Cheeves, nephew Niguel Gadson, special lady friend Lavern Glenn, and a host of aunts, uncles, cousins, proclaimed brothers, sisters, and friends.

OBITUARY Louis Kevin Julian Cheeves, "b.k.a" Kevin, was born in Washington, D.C., on May 13, 1974 to Daisy Cheeves (Stokes) and Darryl Cheeves, Sr. He entered this world on that day as vibrantly as he lived each day thereafter. Kevin was... View Obituary & Service Information

The family of Louis Kevin Cheeves created this Life Tributes page to make it easy to share your memories.