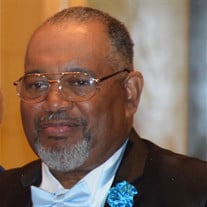 Kenneth Edward Mitchell was born to the late Richard Mitchell and Cleo Chaney on December 26, 1947 in Washington, DC. Kenneth peacefully departed this life on Friday January 21, 2022 at the Medstar Washington Hospital Center in Washington, DC. Kenneth was preceded in death by his parents, his grandmother “Granma Lou”, his sister Fredericka Bailey, and his grandchildren Nasir Mitchell and Moriah R. Chinn. Kenneth was raised by his paternal grandmother Louise Mitchell, who he affectionally called “Granma Lou.” He always shared stories about the special moments he spent with his “Granma Lou.” Kenneth’s education began at Holy Comforter Catholic School and he graduated from Eastern High School with “the awesome Class of 1966.” During his high school years, Kenneth played football and was named “Best Dresser” for the class of 1966. Kenneth retired after 30 years of working in the private industry. Afterwards, he returned to the workforce and worked an additional 10 years with the District Department of Transportation. When he wasn’t working, Kenneth enjoyed letting it be known he loved the Washington Commanders (aka The Redskins and win or lose he remained a faithful fan. Additionally, he ran in the first Washington, DC marathon in 1981. Kenneth was known for his impeccable sense of style and humor. Two of his favorite phrases were, “are you kidding me?” and “unbelievable.” Later in life, Kenneth married Regina Taylor and they enjoyed spending time with family and friends, whether in church or social gatherings. Kenneth was a family man, very supportive and generous to all. He loved his grandchildren and enjoyed spending time with them. Kenneth also became a mentor and father figure to young people inside and outside of his family. Kenneth was a very spiritual man. He practiced what he believed and expressed his love for God by serving others. He enjoyed studying the Bible and sharing the Word with others. Kenneth’s soul became satisfied in 2018 when he joined The Israel of God. He was baptized as Obadiah, meaning servant or worshiper of the Lord. Kenneth leaves to cherish his memory his wife Regina Mitchell, his children, Vaughn Mitchell, Nicole Mitchell, Kimberley Mitchell, Sadrea Muhammad and K. Dené Chinn (Shawn); his grandchildren: Kahlisha Gilchrist, Kaela Mitchell, Dalen Mitchell, Moriah S. Chinn and Elijah Chinn; his great-grandchildren: Damarie Gilchrist, Au’jae Gilchrist, Kalisha Gilchrist, Dominique King-Gilchrist; his siblings: Alton Bailey (Mary), Patt Chaney-Watson, Iris Kerns (Jerome), Brenda Mitchell, Teri Mitchell, Sheila Lyles and Derek Tate; a special niece LaRon Watson and many other relatives and friends.

The family of Mr. Kenneth Edward Mitchell created this Life Tributes page to make it easy to share your memories.