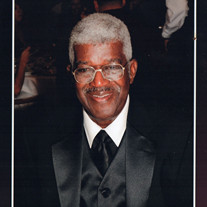 Jerome “Jack” Jackson was born November 24, 1937 in Washington, DC to the late Leroy Jackson and Carrie Jackson. Jerome’s grandmother, Annabelle Jackson, raised him and taught him the importance of being responsible, proud, and a man of his word. Jerome was educated in the DC Public School System and was employed in the underground utility construction field. He was a retired Foreman from B Frank Joy Construction Company. In 1958, Jerome married Irma Brooks. They raised four children together: Ramona, Jerome, Brian, David. In every decision they made, he put his family first. Jack’s personality, kindness, and calm, compassionate spirit touched the lives of many. He was a quiet man, but when he spoke he had a lot to say and people listened. His expression of love, care, and support of his family was never ending. He was the family’s provider, mentor, leader, listener, and enforcer. He volunteered and worked tirelessly to provide skills to his children and exposure to opportunities. He led by example by not getting caught in minor things of little importance. He stressed volunteering your skills and talents; looking out for one another; and taking time help others. He stayed connected with childhood friends and would often go to “shoot the breeze to see what’s going on in his old neighborhood.” As a true Washingtonian and football fan, Jack loved watching the Commanders (aka Redskins) play and would watch the team no matter their position in the league. Jerome and Irma were active members in the “Leisure Ladies and Gents” Retiree Social Club and enjoyed traveling, gatherings, and holiday celebrations. There are many hobbies that he enjoyed: bowling, fishing, puzzles, horse shoes and checkers. He was also an avid miniature clock collector. Over the years, family and friends would always keep an eye out for a miniature clock to add to his collection, which grew to include more than two hundred clocks. Jerome Jackson leaves to cherish his memory: wife of 64 years Irma Jackson; children - Ramona Peyton, Jerome Jackson Jr., Brian Jackson, grandchildren - David Watkins, Makia Moore, Marcus Kelly, Jerome Jackson III; great grandchildren - Alyx Moore, Anthony Moore, Gianni Quiver, Ezekiel Kelly, Kaelynn Kelly, Keith Bryant, ZaNyrah Watkins-Owens; one great great grandson - Anthony Moore, Jr.; and a host of family and friends. Preceded him in death his son David Jackson and his two sisters Aretha Jackson and Barbara Jean Harper. WE WILL ALWAYS REMEMBER HIM FOR THESE QUALITIES AND BE THANKFUL FOR HIS WISDOM AND ADVICE, WHICH HE WAS ALWAYS WILLING TO SHARE.

Jerome &#8220;Jack&#8221; Jackson was born November 24, 1937 in Washington, DC to the late Leroy Jackson and Carrie Jackson. Jerome&#8217;s grandmother, Annabelle Jackson, raised him and taught him the importance of being responsible, proud,... View Obituary & Service Information

The family of MR JEROME JACKSON, SR created this Life Tributes page to make it easy to share your memories.