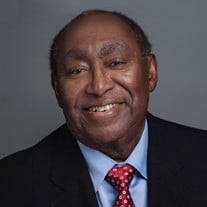 Obituary for MR HOWARD LAWRENCE HENDERSON THE OBITUARY Cares all past, home at last, ever to rejoice. Howard Lawrence Henderson was born to Howard and Dorothy Henderson on June 22, 1944 in Washington, DC. He was called from labor to reward on Wednesday, November 17, 2021. He was educated in the DC Public School System. Howard recognized at an early age that he would need a savior along life's journey; so, he accepted Jesus Christ as his Lord and Savior several years ago and continued to serve Him until death. On March 18, 2007, Howard joined Inter-Denomination Church of God through Christian experience, and he enjoyed serving on the audiovisual ministry. He was a master at using the soundboard and excelled in voice training. Howard's work and career experiences included: serving our nation with two years of active service in the United States Navy, working at IBM, and working in the transportation industry with the Washington Metro Area Transit Authority, Montgomery County Public School System, Metro Access, Uber, and Lyft. Howard's work ethic and experiences were deeply influenced by his grandfather Lawrence's economic philosophy, "always have more than one stream of income". With that in mind, Howard pursued a variety of entrepreneurial ventures, including, but not limited to selling women's hosiery, coffee, weight loss supplements, and life insurance; he owned/operated a limousine service, a recording studio, video rental stores, and laundromats. Most recently, Howard was a licensed realtor, and an ambassador for a membership rewards program business model, where he shared with others a safe place to learn about cryptocurrency and blockchain technology. Howard was a family man. In May 2013, he married Cynthia Bulluck and this union brought together extended families with a host of adult children, namely Marquetta, Hiram, Keisha, Quinelle, Courtney, Kenney, Niambi (Sammie), Ebony, Kelvin (Jillita), and Debra; a host of grandchildren: namely, Karlton (Renee), Lawrence, Dominic, Baylee, Carter, Kayden, and Kalienne. Howard was predeceased by his parents, his sisters Brenda Davis and Faith Henderson, and brother-in-law Henry Davis. Howard leaves to cherish his memory: his wife Cynthia of the home; a host of children, stepchildren, grandchildren, great-grands, as listed above; his siblings Ronald Henderson (Ann), Beverly Hammond (Floyd), Dwight Henderson (Kim); and a host of additional family, friends, and acquaintances. Here's the link for the livestream for Mr. Henderson's service on Friday. http://YouTube.com/ICOG-ORG

Obituary for MR HOWARD LAWRENCE HENDERSON THE OBITUARY Cares all past, home at last, ever to rejoice. Howard Lawrence Henderson was born to Howard and Dorothy Henderson on June 22, 1944 in Washington, DC. He was called from labor to reward... View Obituary & Service Information

The family of MR HOWARD LAWRENCE HENDERSON created this Life Tributes page to make it easy to share your memories.