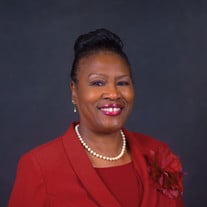 Gloria J. Roseboro was born on April 10, 1948 in Pine Bluff, Arkansas, the oldest of five children to the late Alfred and Emma Lee Killian. She is a product of Buffalo Public Schools. Gloria was married to Herman Roseboro for a period of time... View Obituary & Service Information

The family of Ms. Gloria J Roseboro created this Life Tributes page to make it easy to share your memories.