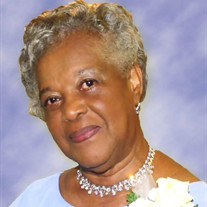 Our dearly beloved mother, bonus mother (as is said today), wife, grandmother, great grandmother, great great grandmother, godmother, Auntie, Cousin, friend and neighbor was peacefully called home on April 10, 2021. To us she was Mommy/Mom, Mother Gloria, G, Granny, Aunt Glo/Gloria, Momma Glo, Ms. D/Mrs. DeSandies. Mom was a very loving woman who people loved to talk to confidentially. Mom loved her children more than she loved herself. She poured into her family and would do anything that she could to make our home comfortable. Mom was loving and kind; a dignified lady. She was very diplomatic and loved her sayings like, "Don't get so excited about everything; Bye and bye you will see (as you get older, you will see); Your word is your wand; Never see, come see (that was if you bought something new and had to put it on right away for everyone to see); To thine own self be true, lest thou canst not then be false to any man; GOD is good ALL the time; Be humble, not haughty; It's okay to be concerned but don't worry about things; When encountering negative people, wish them well and go; Show me your friends and I'll tell you who you are; Who don't hear, will feel..." Those were just a few of the things we would hear growing up. If you were a friend of ours, Mom more than likely called you 'Dear Heart'. Gloria Barbara Pierre was born on July 31, 1926 in Harlem, N.Y. She was the only child of the late Alban and Laura Pierre. Mom was sent to Trinidad, West Indies at the age of six months where her parents were raised. Her father's sisters (Auntie Ben, Aunt Thelma, Auntie Fleda, Aunt Elaine and Aunt Hilda - all deceased) raised her in a very Catholic home where she was taught to be a Lady. For a period of time in Trinidad, Mommy also lived with her mother's sister and husband (Uncle Simon, affectionately known as Uncle Sin and Aunt Babsy). Mom attended St. Joseph's Catholic Convent following it's Holy Orders to become a Nun. At the age of 16, Granny and Grandpa sent for her to come back to New York City approaching the end of World War II. She finished High School at Seward Park High. She then attended The New York Institute of Dietetics. After graduating, Mom was hired by New York Presbyterian Hospital as a Dietician and rose to the position as Head of Dietetics. Both Mom and Dad (deceased) were introduced by a friend of Dad's at a societal gathering. They hit is off nicely and married in 1950. From their union, they produced seven children. Mom decided to follow Dad's dream to go into business for themselves. They owned two hardware stores respectively in Harlem, Artie's Hardware. Mom moved from New York to Baltimore with our sister Michelle and grandson Mikhel. She bought a home where she was blessed with good neighbors and friends. If Mom could, in her passing, she would thank two people who became her sister and Niece in Baltimore, Helen and Lisa Merritt. They loved and cared so much for Mom and she loved them too. There were so many friends through the years who Mom would say thank you for your friendship and love. In Baltimore, resulting from a stroke in 2007, Mom then resided at FutureCare Homewood, long term care. Mr. David Pipkin (Director), a warm and caring man with his staff in Baltimore and then in Largo, FutureCare Capital Region, took exceptional care of our Mother. We could call Mr. Pipkin at anytime if we had a concern and he would be so loving to the family and definitely to Mom. We won't call names because someone who may have cared for Mom, might have unintentionally been omitted. Just know that Mom appreciated every good measure that was done on her behalf. You all were heaven sent. Mom was preceded in death by her husband Arthur Collin DeSandies; her eldest daughter Michelle DeSandies; her first-born son Mikhel DeSandies Sr. and her sixth child, Kevin DeSandies. Mom is survived by her four children, Marcella DeSandies, Renee DeSandies Reynolds (Oliver), Yolanda DeSandies and Mark DeSandies; one Bonus son, Maloney Sandy (Cheryl); four grandchildren, Mikhel DeSandies Jr, Aja DeSandies Dybdahl (Brad), Jared DeSandies, Asiyah DeSandies; two great grandchildren, Air'on Mangrum and Maliah DeSandies; and one great, great grandson, Amir Preston; five bonus grandsons, Ian Sandy, Lloyd Sandy (deceased), Ben Codallo, Colin Sandy, Alex Sandy; Goddaughter's Gloria Aird Tate, and Linda Ward; Godson, Raphael Tamar (Sharon); a host of nieces, nephews, cousins and wonderful friends Helen, Lisa Fay and Marcia (Merritt Family)

The family of Gloria Barbara DeSandies created this Life Tributes page to make it easy to share your memories.