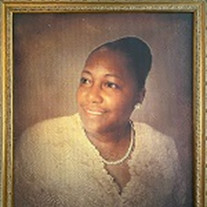 Gladys Sarratt Lowe Gladys was born on February 27, 1942, to the late Willie and Janie Sarratt, in Gaffney, SC. She was the oldest of their eight children. Gladys Sarratt Lowe departed this earth and took up residence in her heavenly home on September 21, 2021. Gladys graduated from Gaffney High School and attended the Denmark Area Trade School for Cosmetology. Soon after graduating high school, Gladys met Eddie Louis Lowe, Sr. According to her own account, after experiencing what she proclaimed was “love at first sight”, followed by a brief courtship, Eddie Sr. and Gladys were married on July 4, 1963. Their union was blessed further by the birth of their three beautiful children; Lesia, Edna, and Eddie Jr. It wasn’t long before Gladys put her cosmetology skills to work. She eventually worked with several funeral homes in the DC area: Alexander Pope Funeral Home, Pinkney-Spangler Funeral Home, and B.K. Henry Funeral Chapel. She was often sought out by the industry not just for her exceptional cosmetology skills, but also for her compassion when interacting with families in their time of need. Gladys also accepted Jesus Christ as her savior at an early age. She soon joined the John Stewart United Methodist Church in Washington, DC, which is now known as Lincoln Park United Methodist Church. Gladys was a faithful and dedicated servant of the Lord at her church for over 50 years. There, she flourished as the Chair of the Culinary Ministry and enjoyed personally cooking for the Feed the Hungry Ministry. Her dedication to service was evident by the various ministries she supported: the Church Council, Communion Stewards, and the Staff/Pastor Parish Relations Committee (SPFC). You could always find Gladys serving, assisting, and uplifting in some capacity at her church and just about anywhere else. Gladys was a phenomenal woman, and loved by everyone who entered her presence. Away from church, she also enjoyed gardening, cooking, and hosting family dinners. Gladys was known throughout the DMV for her exceptional catering service, specializing in baking personalized, homemade cakes and mixing sweet tea until it was just right. Her presence could always be noted by the aroma of her favorite perfume, White Diamonds, and the crisp, tailored style of her St. John suits. Gladys was preceded in death by the love of her life of 38 years, Eddie Lowe, Sr. and her two brothers, Timothy and Tommy Sarratt. Gladys leaves to cherish her fondest memories, three children: Lesia Eldridge, Edna Lowe-Martin, and Eddie Jr. (Stacey); four grand-daughters: Daphne Martin, Dominique Eldridge, Lauryn and Carrington Lowe; one great-grandson: Landon Lowe; two brothers: Willie Dean (MaeFrancis) of Gaffney, SC and Lee Sarratt of Elizabeth, NJ; three sisters: Mary Means (Willie) of Cowpens, SC, Cynthia Landram of Inman, SC and Lesia Mathis (Theodore) of Boiling Springs; three sister-in-law: Viola Washington, Capitol Heights, MD; Doris London and Beatrice Porter of Washington, DC; four Godchildren: Raymond Lightburn, Gus Brooks, Brian Henry, and Cheryl Williams; four God-grandchildren: Jonah, Jaxon, and Jaiden Dixon, and Shayla Ector. Gladys leaves several faitherful friends: Earlene Barrett, Barbara Jefferson and Evelyn Pearson, affectionately known as the Three Musketeers; two adopted brothers, Larry Simmons (Eva) and Clyde Smith. She also leaves a host of nieces, nephews cousins, friends, and extended family and friends.

Gladys Sarratt Lowe Gladys was born on February 27, 1942, to the late Willie and Janie Sarratt, in Gaffney, SC. She was the oldest of their eight children. Gladys Sarratt Lowe departed this earth and took up residence in her heavenly home... View Obituary & Service Information

The family of Gladys Sarratt Lowe created this Life Tributes page to make it easy to share your memories.