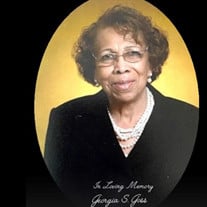 Surrounded by loved ones, Georgia Goss departed this life on Monday evening September 13, 2021. She was preceded in death by her husband Everett Goss, her mother Rebecca Meyers Gaston, her father James Meyers and her older sister Ida Smalls Pierceson. Georgia was born in Beech Island, South Carolina on May 10,1925. Early on, her mother moved with her girls to Augusta, Georgia. She moved to the city because she was focused on her girls getting an education. Georgia was educated in the public and the private school systems in the city. She later graduated from Haines Normal Institute. Afterwards she attended Paine College in Augusta, Georgia and later completed further study at Savannah State College in Savannah, Georgia. For a short time after college, Georgia returned to Augusta and worked as a clerical supervisor at the Pilgrim Health and Life Insurance company. After a year and half at the Pilgrim, Georgia responded to a 1940's federal recruiting effort, which included young women of color. Georgia was one from among many young women who applied and was accepted to the program. This meant she would move to Washington, D.C. These young women came to Washington D.C and were housed in college dormitories, where they were expected to present themselves as intelligent well-mannered young ladies. Playing cards and attending specially planned social events were the order of the day. It was at one of these social events that Everett and Georgia met and later married. On November 25, 2011, they celebrated their 50th wedding anniversary. Georgia worked in the Department of Finance, later transferring to the Department of Labor from which she retired after 50 plus years of service. One of the interesting remarks made by someone from the Secretary of Labor who spoke at her retirement celebration was that Georgia was known as a perfectionist. Projects were always efficiently done on time and there were hardly ever any mistakes. Georgia loved a social outing, attending a jazz concert, enjoying a meal out and shopping trips were all high on her list. The Birchmere and Table Talk were two of her favorite spots. Georgia could have been an interior designer as her home was beautiful and so was she as self-care and self-love was a priority. She had excellent organizational skills with all correspondence neatly filed and organized. Georgia was also very independent. At the blessed age of 94 she could be found driving her own car, shopping amongst running other errands. In 1974, Georgia and Everett moved from the Washington, D.C. to Alexandria, Virginia. She immediately connected with Alfred Street Baptist Church. Georgia loved Alfred Street and often arrived at least two hours or more before church commenced to ensure that she sat in her favorite seat. In addition, Georgia was a member of Alfred Street Discipleship Group #28 where she developed long lasting friendships and would be seen fellowshipping with the group in and outside of church. Georgia is survived by her sister Edwina Meyers-Lynch of New York City; Goddaughter Roslynn Garvin of Alexandria, Virginia, "adopted grandson" Marcus Garvin, 3 nieces Tamara Lynch of New York City, Marietta D. Newman of Atlanta, Georgia, Patricia Thompson of Spartanburg, South Carolina, and 2 nephews Jamie Lynch of New York City and Kenneth Pearson of Atlanta, Georgia and a host of close friends.

Surrounded by loved ones, Georgia Goss departed this life on Monday evening September 13, 2021. She was preceded in death by her husband Everett Goss, her mother Rebecca Meyers Gaston, her father James Meyers and her older sister Ida Smalls... View Obituary & Service Information

The family of Georgia S. Goss created this Life Tributes page to make it easy to share your memories.

Surrounded by loved ones, Georgia Goss departed this life on...