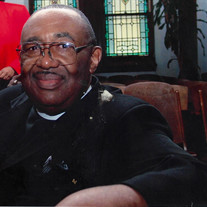 Reverend Fred Julius McCoy was born to the late Connie and Annie Mae McCoy in Kershaw, South Carolina. He attended South Carolina public schools and at an early age attended Sandy Grove Methodist Church, also in Kershaw. Upon moving to Washington D.C., Fred joined Union Wesley AME Zion Church. He later enlisted in the U.S. Air Force and after leaving military service met and married the former Earlean Hardy. They were joined in Holy Matrimony on August 24, 1957. From this union, they had four children: Patrice, Janet, Shereese and Fredrick. Fred first learned his trade as an Offset Pressman at Rueben H. Donnelly Publishing Company in Washington, DC. The skills he acquired there led him to employment at the U.S. Department of Treasury, also as an Offset Pressman, later running the largest multi-color press of that time. In 2003, Fred retired from the Department of Treasury after 37 years of service. Before departing, he received the Albert Gallatin Award, one of the highest recognitions at the Department of Treasury, awarded for professionalism and integrity, traits that were his hallmarks in every personal and business dealing. On a very personal level, but widely known by the people who knew and loved him well, Fred also had a penchant for the culinary flairs of life. He enjoyed baking delectable cakes and cooking his celebrated and yet to be duplicated savory, comforting, and palate-pleasing cabbage for intimate family gatherings. He especially loved baking and sharing his cakes with members of the church. There's nothing like a man who can cook! To add to his many strengths and talents, Fred Julius McCoy was a DIYer before DIYers became popular. This caused his wife to endear him as the "Jack of All Trades, Master of None," an affectionately esteemed title. Speaking of esteem, in 1987 under the Ecumenical Ordination Service of the African Methodist Episcopal Zion, the African Methodist Episcopal, the Christian Methodist Episcopal and the United Methodist Church, Fred was ordained a Deacon. He subsequently was ordained an Elder in 1989. In ministry, Fred served in many capacities including visiting and praying for the sick, assisting the Pastor during Sunday worship services, attending and teaching Sunday School and doing street ministry, spreading the Gospel everywhere he went. His effectual and fervent commitment led him to be coined "The Subway Minister," a lighthearted nickname that carried a tremendous weight of responsibility and caring to execute. Fred J. McCoy represents a rare and influential breed of man who remained vested in family, church and community. Because of his fatherhood, his daughters can gauge and appreciate the true measure of a man. His son can be upstanding and forthright by his father's example. His wife shares the fruits of a lifelong partner who refused to recoil from the challenge of commitment. Their longevity is a testament to his faithfulness, and his legacy, deeply rooted in family love and values and the love of the Lord, will continue to inspire for generations. May his soul rest in eternal Peace. Fred Julius McCoy leaves to cherish his memory: his wife Earlean, children Patrice Barber, Janet Proctor (Donnell), Shereese Gordon (Terry Sr.) and Fredrick McCoy; sister Ella Luke, brother David McCoy; sister-in-law Belvyn Pyles; grandchildren Lakia Barber-Lyle (Christopher), Julius McCoy, Brittney Barber, Corey McCoy, Terry Gordon Jr, Lytice Gordon, Robert Gordon, Jacari McCoy; great grandchildren: Jewels McCoy, Kingston Green, and Aaron Lyle and a host of nieces, nephews, cousins and friends.

The family of Mr. Fred Julius McCoy, Sr. created this Life Tributes page to make it easy to share your memories.

Reverend Fred Julius McCoy was born to the late Connie and Annie...