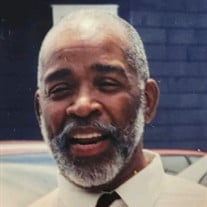 Douglas Oliver Armstrong was born in Nashville, TN, November 24, 1947, the fifth child of James E. and Mary A. Armstrong. Being in the middle, he had exactly three brothers and a sister before him, and three brothers and a sister after him. He attended and graduated from Pearl High School in June 1965 (a Nashville Historic Landmark est. 1883) in which most of the Armstrong family graduated. He then moved to Washington DC. In July of 1965, while working at Internal Revenue Service Cafeteria, he met the love of his life. For him, it was love at first sight and he didn't even know her name. He would find out her name, Lauraella (La), and go on to marry her on August 30, 1966. In June 2019, at the time of her passing, they celebrated 19,166 days together, almost 53 years. Douglas primarily worked in Warehouse Management with Grand Union, Organic Foods, MS Ginns, Universal Appliances & Parts, and Marlo Furniture. He gave his life to Christ at Faith Presbyterian Church in SW, DC, he also attended Anna Johenning Baptist Church in SE DC (currently Temple of Praise) and he's been a member of Hunter Memorial AME Church (currently known as Real Power AME Church) for many years. He was a member of the Steward Board, Trustee Board, Usher Board and Transportation Ministry. Douglas' mantra was "God and I are doing Great!" He spent his time drawing, writing in his journal, praying, singing and encouraging many. He loved his dialysis family for a total of 13 years (since 2008). He had two different periods, there was a break when he was a kidney transplant recipient. Douglas departed on Thursday, November 4, 2021, due to a brain injury after a fall. In his transition he was able to contribute and enhance the quality of life of others with the Washington Regional Transplant Community. He is preceded in death by his Parents: James E. Armstrong, Sr., and Mary A. Armstrong; his wife Lauraella T. Armstrong, siblings: James E. Armstrong, Jr., Juanita Armstrong-Carter, Benjamin L. Armstrong, Helen Marie Duncan, John W. Armstrong, Sr., Joan A. Armstrong, Alfred S. Armstrong, and Carlton W. Armstrong, Sr. He leaves behind to remember him, his two daughters Laurese Nichole Armstrong, Angela Rochelle Watkins (Corey), granddaughter Katlyn Marie Armstrong, niece/daughter Lisa M. Becton-Armstrong, "adopted" daughters Catina Hebb and Christine Anderson, siblings: William C. Armstrong and Ronald O. Armstrong, Godsons: Micah Singleton, Donald Tabron Jr., and a host of cousins, nieces, nephews and many friends. He will truly be missed by those he leaves behind. A memorial service will be held on Friday November 19, 2021 at Pope Funeral Homes, Forestville Chapel - 5538 Marlboro Pike District Heights, MD 20747 from 2:00 pm to 4:00 pm and streamed to attend virtually. To send a contribution to assist the family visit the In the Memory of Douglas Armstrong page. (https://gofund.me/5f6025b5)

The family of MR DOUGLAS OLIVER ARMSTRONG created this Life Tributes page to make it easy to share your memories.