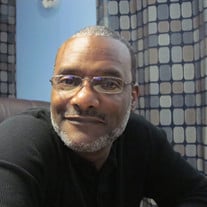 Remembering Tony Tony was born in Washington, DC as Anthony (Tony) Quinton Kittrell on July 9, 1958. He spent his early childhood living in NW. DC in the Kennedy St. area with 3 siblings and 5 cousins before the family moved to S.E. and into Barry Farms. His early education came from several District of Columbia elementary schools including Birney, Draper, Janney and Sumner. His education continued in the Prince George's County School System when his family moved to Landover, MD where he spent most of his formative years. Tony loved music and spent countless hours in the early 1970s sampling various types of music from the Columbia Record & Tape Club which left him with a pallet of diverse sounds from almost all genres. His love of music led him to team up with childhood friend Steven Clay where he became the DJ for parties in the neighborhood recreation center. Tony became well known for mixing and cutting songs long before mixing and cutting became popular, often extending portions of well-known songs to the surprise and delight of party-goers, which led to his neighborhood recreation center becoming the number one destination on weekends for Landover area party-goers during the mid-70s. Tony made the honor roll before graduating from Largo, Sr. High School in 1977. He went right to work taking an administrative position in Riverdale, MD where he spent 1 year before joining the United States Air force. Tony spent 4 ½ years in the Air Force, stationed at Minot, AFB, ND where he would meet his wife, Patsy. After returning home from the Air Force, Tony worked several years in Crystal City, VA. Tony continued his education by attending Prince George's Community College where he obtained his AA Degree in Business Administration before transferring his credits Bowie State where he obtained his Bachelor's in Business Administration. Tony was pretty steady in his employment. He worked 11yrs at Acquisition Planning Corporation (APC), 4yrs at Educational Services Incorporation (ESI), and 16 at his last place of employment, The American Chemical Society (ACS). Tony was diagnosed with Prostate Cancer in 2008 and battled the disease valiantly since that time. With no cure so far in 2022, he lost the battle on 12 June 2022. Tony leaves behind his wife of 40 years, Patsy Kittrell, his 2 sons, Tony Kittrell Jr. & Michael Kittrell, his 3 grandkids, Taylor Kittrell, Kennedy Kittrell and Dylan Kittrell, his loving mother Burdine Felder, sister Paula Gray, brother Bernard Kittrell, an Aunt and Uncle and several nieces, nephews and cousins. He was preceded in death by his father James Felder, and brother Paul Kittrell

Remembering Tony Tony was born in Washington, DC as Anthony (Tony) Quinton Kittrell on July 9, 1958. He spent his early childhood living in NW. DC in the Kennedy St. area with 3 siblings and 5 cousins before the family moved to S.E. and... View Obituary & Service Information

The family of Mr. Anthony Q. Kittrell created this Life Tributes page to make it easy to share your memories.

Tony was born in Washington, DC as Anthony...