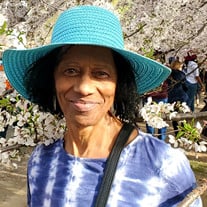 Annie transitioned to her heavenly home on November 9th, 2021. She was born on July 16th, 1946 to the late Annie and Walker Carter in Richmond County, Virginia. Annie graduated from Richmond County High School as valedictorian of her class. She received a Bachelor's degree in Business Administration from Virginia State University. She later pursued post graduate studies in General Administration at the University College in College Park, MD. Annie joined Mt. Zion Baptist Church in Farnham, Virginia at an early age and later attended New Southern Rock Baptist Church after moving to Maryland. She became a member of Mt. Jezreel Baptist Church in 1986. She loved helping others in her community. Annie became one of the founding members and Treasurer of the Community Outreach Program at Mt. Jezreel after attending a Church Alive Conference by the late Pastor Trammell. When the church decided to open a bookstore, she began volunteering in the store as a cashier, served briefly on the Credit Union Audit Committee and member of the SURE ministry. Always eager to serve and help others she volunteered her time at the Food Bank Ministry when it opened at the church. Professionally, Annie worked over 20 years in DC as a senior financial analyst and staff consultant in two different consulting firms. In an effort to find work closer to home, she then began working at the University of Maryland in College Park in the EPSL and McKeldin Libraries. After working as a Business Manager in 3 departments at the University, she retired in 2014. Her favorite phrase became " Retirement is when you stop living at work and begin working at living". Of course, that didn't last long before she began to use her financial background to help her daughter who opened the first Chick-fil-A in Washington DC. Annie loved spending time with her granddaughter who affectionately called her " GG". She was very devoted to her family and always willing to lend a helping hand. She also enjoyed her time with their ladies group, the "8 Diamonds". Annie was very inquisitive and loved reading nonfiction books, traveling, nature walks and going on cruises. She was married for 26 years to Norman Walker, Sr. and enjoyed spending time with her Godchildren and their children. Loved ones left to cherish her memory are her daughter, Jessie and husband Karlton; brother, Rodney; granddaughter, Gabrielle; later brother James (children), Tanya (her children and grandchildren) and Naomi; late brother Charles children, Kevin ( his children) and Edward (his children); late sister Ernestine son, Blake (his children); God Children, Christine, Cherise, Norman Jr. (their children); Sisters-in-Law, Lauren and Bernardette; former sister-in-law, Algeria and a host of dear cousins, other family members, devoted friends and love ones.

Annie transitioned to her heavenly home on November 9th, 2021. She was born on July 16th, 1946 to the late Annie and Walker Carter in Richmond County, Virginia. Annie graduated from Richmond County High School as valedictorian of her class.... View Obituary & Service Information

The family of Ms. Annie M. Carter created this Life Tributes page to make it easy to share your memories.

Annie transitioned to her heavenly home on November 9th, 2021....