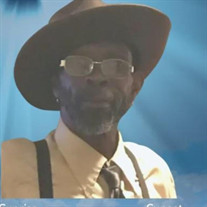 Obituary Wilbur Eugene Stroman was born on June 22, 1950 in Orangeburg, South Carolina to the late Francena (Shaw) Stroman and Charlie Eugene Stroman. He was affectionately known as “Super Click, Bowlegged, Will and Uncle Wolfy”. He attended DC Public Schools. Wilbur obtained his GED and started working for Olympic Bakery. He left the bakery and was then employment with PRIDE, Inc. After leaving PRIDE he worked for Kenilworth Park & Aquantic Gardens (Lilly Pond) for a few years. Because of his love for gardening, beautiful flowers, and plants he later was employed by Abdow Florist where he delivered and did floral arrangements before he retired. He didn’t retire totally, Wilbur took on the task of taking care of our Mother, babysitting, and assisting in raising his nieces/nephews as well as great-nieces/nephews. He loved the kids and they loved him too!! He had a kind and loving heart. Wilbur was always telling his family how much he loved them or miss them. Wilbur was a man of faith. He would always quote the bible or talk about the Quran. He enjoyed dancing, playing cards, cooking, and singing even if he didn’t know all the words. He also thought he could rap. His most famous rap was “Freda, Freda you so fine, you so fine you blow my mind”. At family gatherings, after a few “cocktails”, he couldn’t remember everybody's name he would just call you baby sis, bro, brah, niecey, or nephew. And he told each of us we were his favorite! His daughter Lavonya was born from a previous relationship. He later married Alfreda McCrary and became step-father to her 4 daughters Malinda, Sirlekar, Andrea and LaTorya. He was preceded in death by his parents Charlie Eugene and Francena (Shaw) Stroman; stepfather Herman Shaw; maternal grandparents Frank and Alice Thomas-Robinson and best friends Isaac “Crip” Johnson. He leaves to mourn his wife Alfreda; daughter Lavonya Hines (Hosea); stepdaughters Sirlekar Bullocks (Marcus), Malinda Vaughn (Willie Bradley), Andrea Waters, LaTorya Lovitt (Jonathan); siblings Bernard Robinson (Moye), Billy (Kim), Janis, Larry (Henrietta), Brenda, Greg (Lolita), James (Ruth) and Rosita; 1 granddaughter, 9 step-grandchildren and 16 step-great-grandchildren and a host of nieces, nephews, cousins, and family friends. His extended neighborhood families, the Whites, Wiggins, Tolliver, Chambers-Deas, Tuning, Wood, and Warren. Best friend John “Dink” and special neighborhood friends Bryan and Peter Proctor.

The family of MR WILBUR EUGENE STROMAN created this Life Tributes page to make it easy to share your memories.

Obituary
Wilbur Eugene Stroman was born on June 22, 1950 in Orangeburg,...