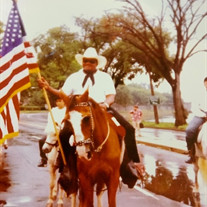 William E. Leak, affectionately known as "Wild Bill" was born in Guilford County, North Carolina, on August 25, 1926 to the late Henry Leak, Sr. and Rufus Valentine. On December 2, 2021, God decided it was time for Bill to take his eternal rest. Bill was a young child when his mother passed away. He would then be raised by his 2nd oldest brother Allen Leak Valentine and sister-in-law Rosa Graves-Valentine whom he affectionately referred to as "Pop" and "Ma". His oldest sister, the late Marie Leak-Bigelow also shared in raising him while they were still in Greensboro, NC where he was also educated. Family stories say that Bill would skip school to sneak into the "picture show" as it was called back then. He loved watching Western films which birthed his early and life-long fascination with horses. During his younger years, Bill moved from North Carolina to the Washington D.C. metropolitan area. Bill enlisted into the U.S. Army in 1946, in Randolph Field, Texas and was later honorably discharged. Bill returned to Washington D.C. where he began family life as father to Gloria Rodella. From his union to the late Mary Leak, Regina Diane, Patricia Laverne, Tijuana Yvette, and William Brian were born. Another daughter, Renee Maria was also born. Bill worked several jobs and did his best to support his family. He was a handsome man with a mesmerizing smile. His charm and charisma were his greatest attributes. Those attributes were front and center during his time spent working as a doorman at the Republic Theater and as an usher at the Lincoln Theater both on U street in Washington, DC. Bill also worked at the Coca Cola Bottling Company and as a station attendant at a local Amoco Gas station. After many years of working hard he retired as a driver from Tecfab, a concrete hauling company in DC. Never known to be one for sitting still, after retirement Bill worked as a transport van driver for karate students. Driving was a passion for Bill which he embraced in Ford vehicles. From a Thunderbird with an "Oooga" horn to F250 to Bronco to Fusion, he loved and cherished owning and driving Ford vehicles until he reluctantly turned the car keys in for a scooter, which in no way slowed him down. He enjoyed living independently and meeting new people at his senior residence where he lived for 23 years. Like his oldest brothers, Bill had "the gift of gab" and was always ready for a good time. He enjoyed trips to the casinos and he made sure to get his weekly scratch off lottery tickets (on his scooter). Bill loved football. Specifically, "Them Cowboys". He was proud to wear Dallas Cowboy attire as often as possible, sometimes even head to toe. He was definitely one the team's biggest fans. One might very easily recall after a football game receiving a phone call from him to brag about a Cowboy win over his family of Redskin fans. Naturally, we all know and remember Bill as a cowboy. On one Easter Monday in the early 1970's, Bill took his children on an outing to ride horses at B&N Stables on Central Avenue. A week later, in true Wild Bill fashion, he bought a horse and named him "Lightning". The two would prove to be inseparable. Bill's love for riding ran so deep he created three more generations (and counting) of cowboys and cowgirls. Wild Bill and Lightning could be seen regularly around the DC area. Bill had the honor of being a Grand Marshall and accompanying Mayor Marion Barry in Georgia Avenue Day parades as well as other parades around the city. Lightning wasn't the only furry member of the Leak clan in the early 1970's. A beloved monkey named Susie who Bill loved and spoiled like a child was also added to the family dynamic. He also had several dogs he loved throughout his life. During his 95 years of life, Bill witnessed racial discrimination, economic hardship, and personal losses. He lived through 17 presidents, and proudly voted for the first Black President of the United States, Barack Obama. In his words "I never thought I would see the day that I would be able to vote for a black president." In spite of the tough times in his life, Bill emerged a strong person, determined to do everything "my way or the highway." He had an undeniable strength and at times stubborn, but he always gave his best effort. He is cherished and will be missed by all who knew him. Bill's memory will live on and be remembered by his children: Gloria Leak, Tijuana Dixon (Darrell), Patricia Rose, William Leak, Renee Booth (Wayne); 11 grandchildren: Cedric Gordon, LaShel Williams, Teon Lindsey, LaTaunya Hall, Oneika Stevenson, Darrell Dixon Jr., William Leak Jr., Shanta Holmes, Tomeka Sanders, Natasha Wilson, Marcell Jones Jr.; 37 great-grandchildren; 18 great-great grandchildren; the oldest of several nieces and nephews, Bernell "Bunky" Valentine and a special daughter-in-law, Denise Leak. Bill is preceded in death by his daughter Regina Diane; brothers Anderson Valentine, Allen Valentine, and Henry, Leak, Jr.; sisters Marie Leak- Bigelow, Louise Valentine-DeBaptiste, O'Quinn Leak, Margaret Leak-Anderson, and Frances Leak-Smith.

William E. Leak, affectionately known as "Wild Bill" was born in Guilford County, North Carolina, on August 25, 1926 to the late Henry Leak, Sr. and Rufus Valentine. On December 2, 2021, God decided it was time for Bill to take his eternal... View Obituary & Service Information

The family of MR WILLIAM ELIAH LEAK created this Life Tributes page to make it easy to share your memories.