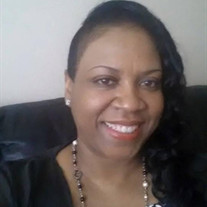 Shanette's untimely and unfortunate departure happened on Wednesday, July 14, 2021 at her home. Shanette was born in DC General Hospital, November 30, 1972. She was born to the parents of Thomas and Germaine Dade and loved by her family, many friends and acquaintances up to the point where she departed this life. Shanette went to public schools in the District of Columbia; Miner Elementary, Brown Junior High and she graduated from Spingarn High school. Once she graduated high school she went for studies at Catholic University for a time. From there she went on to be an independent business person starting her business as Nette's Nails where she did nails, she was a barber and she also did eyebrow arching. She was a woman that has always been independent and she did that for about 6 years. After that she worked in the Security field as a contractor for a great many years. While working full time she started her jewelry making business that was named "Flowcase". Shanette was a person that loved to sing and in high school she sang with the school choir and she would sing with her Uncle "JC" as they were preparing to perform at different places. You would always hear her singing just because and she definitely had a love for music. Right up until her transition she and her friend Anthony from their high school would sing together on the phone during their conversations together. Shanette had a zeal and love of life, she made every encounter with friends and people in general a pleasure. But she was a woman that didn't let things hold her back. She knew how to keep it moving and she would not let things stand in her way; she had that mentality of "just open up the door I will get it myself". She was a go-getter and a committed person. Shanette leaves to morn her passing her son Antonio Dade, grandmother Deborah Boyce, mother Germaine Taylor, father Thomas Dade, blended mother Ann Dade, (her sister Martee preceded her in death), great uncle George Dade, sister Angela Dade, brothers David, Thomas, Torrazz, Andrew; uncles Gerald Crumlin, Barry Walker, James Ginyard (Saundra), Larry Ginyard (Saundra), Bennie Ginyard, aunts Francine Ginyard, Gwendolyn Ginyard, Darlene Lashley (James), a host of cousins, nieces, nephews, friends and acquaintances.

Shanette's untimely and unfortunate departure happened on Wednesday, July 14, 2021 at her home. Shanette was born in DC General Hospital, November 30, 1972. She was born to the parents of Thomas and Germaine Dade and loved by her family, many... View Obituary & Service Information

The family of SHANETTE M. DADE created this Life Tributes page to make it easy to share your memories.