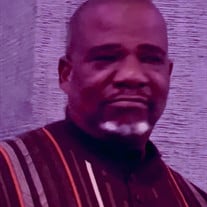 T H E L I F E & L E G A C Y O F REGINALD LEE NEWMAN Reginald (Reggie) Lee Newman son of the late Shirley Newman and Raymond Coates departed this life on January 13, 2022 after a brief illness. Reggie was born and raised in Washington, DC. He graduated from Mackin Catholic High School and attended the University of the District of Columbia. In 1977, Reggie and Wanda was blessed with a son Jeron whom they loved and adored. Reggie took great pride in being a father and led by example. Reggie and Jeron were not just father and son - they were friends. Reggie was formerly a Correctional Officer. Reggie was also a firefighter. After retiring from the Prince Georges' fire department, he studied Information Technology and later became a Senior Network Engineer. He worked at various government contracting firms and also was an independent contractor. He was a hard worker and worked tirelessly to provide a good life for himself and his family. Reggie was an avid sports fan. You could find him perched in front of the tv rooting for his favorite teams. Reggie loved hosting gatherings. He was an AWESOME cook and his delectable dishes were loved by many. Our family Thanksgivings and Christmases weren't complete unless we had one of his famous Cajun fried turkeys and his majestically marinated roast beefs. Reggie was also very adventurous. He was a world traveler. He visited many exotic destinations and took great pleasure in discussing his many excursions. He was a biker and on a beautiful day you could find him take a leisurely ride on his bike. He also loved going fishing so much so that he was the Captain of his very own Vessel. Reggie was a great dad, brother, uncle, cousin and friend. He absolutely adored his family and friends and it was truly a joy to be in his company. He was the youngest of his siblings, but you would never know it because of his striking presence. He was one of the smartest, most loving, kindest and gentlest human beings you could ever meet. He truly had a generous heart and a loving spirit. He was an integral part of our family and he will be sorely missed. Reggie leaves to cherish his memory, his son, Jeron; brothers, Gregory and Karl; nephews/nieces: Brian Christian, Joel Hornbeck, Rachel Stowell (Greg); brother-in-law: Michael Taylor; beloved cousin/sister: Arlene Paige; beloved cousin/bonus niece: Tiffany Reed (Micah) and a host of other relatives and friends. His parents, sister Brenda and grandson Aaron preceded him in death.

The family of Mr. Reginald Lee Newman created this Life Tributes page to make it easy to share your memories.