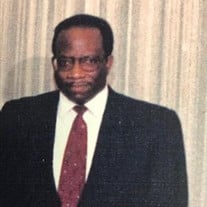 Sunrise: July 21, 1947 Sunset: December 13, 2021 Mr. Percy Leon Tolbert was born in Montevallo, Alabama, on July 21, 1947, to Henry Lee and Flossie (Nix) Tolbert. He was one of seven children. Upon graduating from high school, Percy attended Alabama A&M University in Huntsville, Alabama. Upon graduation with a Bachelor’s Degree in Electrical Engineering in 1969, he began working at Rockwell International in southern California. However, during his time there he was drafted into the US Air Force, where he served the country until his honorable discharge in 1972. Following that he began working at IBM until 1978. He befriended coworkers working at IBM during that time. His career then transitioned to working for the US Navy at Naval Sea Systems Command (NAVSEA), where he worked as a Project Manager for 36 years in the Washington, DC area. He was an excellent, dedicated worker who was smart and knew how to get the job completed. Many of his co-workers that knew him already knew that he was wonderful to work with. Upon his retirement from NAVSEA, he stayed busy taking care of our home and worked as a co-owner and director with Mr. Jay Jones of Systems Research and Manufacturing Corporation (SRMC), which produces electronic products. Percy loved the Lord and had a strong love for his family, and all that knew him will surely miss his kindness, helpfulness, and smile. He was faithful to the word of God, and he was an usher at Alfred Street Baptist Church in Alexandria, Virginia. He would usually be in the balcony area and was well respected by his fellow ushers. On Monday, December 13, 2021, he was peacefully guided by the holy angels into his place of eternal rest. II Corinthians 5:8 says, “We are confident, yes, well pleased rather to be absent from the body and to be present with the Lord.” Percy Leon Tolbert is now with the Lord. Percy was preceded in death by his beloved mother, Flossie Tolbert; father, Henry L. Tolbert; brother, Fred L. Tolbert, Sr.; brother, James Tolbert; sister, Brenda Tolbert-Williams; and sister, Annie Bell Tolbert (Shelton). He leaves behind his Aunt Gussie Wells, sister, Ida Tolbert (Davis), sister, Sandra Cammack, his caring wife, Lorraine Y. Tolbert, his son, Sean W. Tolbert, and a host of nephews, nieces, great-nieces, great-nephews, cousins, other relatives, and several dear and devoted friends. Special thanks to the doctors and nurses at INOVA Mt. Vernon and Alexandria Hospitals and all the caregivers at the rehabilitation centers.

The family of Percy Leon Tolbert created this Life Tributes page to make it easy to share your memories.