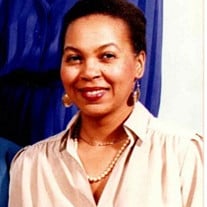 Patricia Celeste Taylor, nee Richmond, was born on November 25, 1953, in Washington, DC, to Ora Ardell and James Richmond, Sr. Patricia attended D.C. public schools and graduated with a BA in Photojournalism from the University of the District of Columbia. Pursuing her interest in photography, she created a dark room in the basement of the family home, where she developed many photos she had taken around the city and in her travels. Following her graduation from college, Patricia traveled overseas to France, Switzerland, the Caribbean and to Nigeria in West Africa. Trish spoke French fluently and enjoyed speaking the language at home. She had a long career, including working for the U.S. Senate, and was a published author, having written for FoxTrappe Magazine. Trish, a lady with a beautiful smile, was friendly by nature and developed deep friendships, some that lasted a lifetime. Patricia was baptized at a young age at St. Mark's Baptist Church in Washington DC, and later, as an adult, joined Pilgrim Baptist Church in Silver Spring, Md. Her journey with Christ was always important to her and, even after being stricken with Multiple Sclerosis and suffering two strokes, she never lost her love for and praise of the Lord. She leaves, not to mourn her passing, but to cherish loving memories, her son Yusef and granddaughter Zoey, siblings Ardell (Oliver) Bell, James Richmond, Jr., Linda Bell, and Carlton Richmond. Her brother Michael Richmond pre-deceased her 2 years ago. Also with wonderful memories are her sister-in-law Yasmin Richmond, Aunt Emily Spears, nieces Karen (Terence) Anderson, Macoia Richmond, Alissa Bell and Truthe Cephas; nephews Brian, Jon, David (Rosana), and Ronald Bell, Yamir Richmond, Akhari White and many other cousins and distant relatives.

Patricia Celeste Taylor, nee Richmond, was born on November 25, 1953, in Washington, DC, to Ora Ardell and James Richmond, Sr. Patricia attended D.C. public schools and graduated with a BA in Photojournalism from the University of the District... View Obituary & Service Information

The family of Patricia Celeste Taylor created this Life Tributes page to make it easy to share your memories.