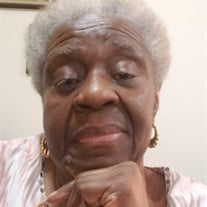 Ms. Norma Jean Andrews was born December 6, 1937 in Montgomery, AL. She was the older of two children born to Martha Witherspoon, who preceded her in death. She was a mother to five children, one son who preceded her in death, Willie James Witherspoon. Norma worked as an accountant and systems analysts for the United States Department of Defense, where she later retired after 30+ years of service. She traveled the world balancing budgets and making recommendations to ensure smooth economic operations in global finance. She absolutely loved her job. After some amazing accomplishments, she was offered and accepted a position to manage the entire finance department in Heidelberg, West Germany for the US DOD. While living in Germany, she learned the language, traveled throughout Europe and made some lifelong friends that she stayed connected to for many years until her memory lost touch with them. She always kept them in her heart. She gained her wings in the early morning of June 20, 2021. She leaves to cherish her memory, two daughters, Carolyn Witherspoon-Ivey and Rolonda Andrews; two sons, Maurice Chance & Kevin Chance; her brother, Edward Robertson; her grandchildren, Itriyeasher "Lawann" Witherspoon, Antoine Roberts, Ashley Roberts & Jenisha Chance; her great grandchildren, Troy Ashley, Aniyah Cosbert, Antoine Roberts, Jr, Thomas Brown & Dorian Gladden; two nieces, Kecia Robertson & Shelly Blackston and a host of relatives and many friends.

The family of Norma Jean Andrews created this Life Tributes page to make it easy to share your memories.