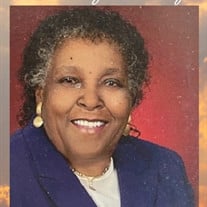 Nancy Jane Turner was born on May 1, 1936 in Seneca, South Carolina to the late Henry and Equilla Williams. She was the tenth child of thirteen children. Nancy attended school in South Carolina, graduating from East End High School. Upon moving to Washington. DC, she enrolled and graduated from Atlantic Business School. She was later employed by the US Department of Treasury. Bureau of Engraving and Printing as a Personnel Management Specialist, retiring after 26 years of service. At an early age Nancy accepted Christ as her Lord and Savior while attending Shiloh Baptist Church, where she served with her family until moving to Washington, DC. She then joined Israel Baptist Church where she was a faithful member for over 40 years. During this time, she was a part o f the Missionary and South Carolina Club. Nancy was married to Samuel A. Turner, and from this union six children were born: Cheryl, Cindy, Kelvin. Reginald, Debbie, and Karen. Nancy loved spending time with her children, and made sure they were well taken care of. Her commitment to her children w a s ever present. Family gatherings were important to Nancy. She created a tradition of hosting family and friends on Sundays at her home for dinner...all were welcome. Upon entering the house, everyone walked right to the kitchen, following the sound of her singing hymns and the smell of good food - knowing that she spent all day cooking and baking. This brought everyone together for food, fun, and fellowship. Many came with the anticipation of indulging in her tasty pies, sweet bread, and her famous cakes that everyone requested. She often let her grandchildren "help" bake (aka "licking the spoon"). Her Sunday dinners often ended with a friendly game of Scrabble. Nancy was revered by others for her devotion to her family. She was known for helping out where she was needed: and played an active role in raising and caring for her grandchildren. Nancy was a praying woman who's faith was unwavering. Her personality was simple yet complex; with a strong presence which caused people to stop and listen when she spoke. Nancy was truly the heartbeat of the family. Outside of spending time with family, Nancy appreciated her quiet time. She was an avid reader, and particularly enjoyed books by Danielle Steele. Nancy developed many lasting relationships: and will forever be remembered for her loving personality, no-nonsense attitude, great hospitality, and as a true person to heart. On Friday, July 30, 2021. Nancy departed this life and transitioned to be with the Lord. She leaves to cherish her memory, her six loving children: Cheryl Turner, Cynthia Turner, Kelvin Turner. Reginald Turner, Deborah (Ronnie) Perkins, and Karen Akers: grandchildren: Tanya (Ismail) Gibson, Demisha (Daymon) Williams, Walter Miller, Marvin Alston, Kristia (Nigel) Williams, Dekisha (Darnell) Posey. Jasmine Turner,D 'Angelo Akers, Kiana (Ryan) Neely. Ronald Perkins III, and Alicia Reese: a host of great-grandchildren and great-great-grandchildren; one brother: Kenneth Williams:adopted sister: Mattie Ruth Nichols: sisters-in-law : Meta Williams and Gloria Williams:devoted family friends: Mary and James Williams: a host of nephews, nieces, cousins, other relatives and friends. She was preceded in death by her parents: Henry and Equilla Williams: four brothers: Sylvester, James, Edward, and Samuel Williams; seven sisters: Macie Randolph, Marie McCoy, Susie Bell. Inez Howard, Geneva Greene, Equilla Williams, and Ruth Herbert.

Nancy Jane Turner was born on May 1, 1936 in Seneca, South Carolina to the late Henry and Equilla Williams. She was the tenth child of thirteen children. Nancy attended school in South Carolina, graduating from East End High School. Upon moving... View Obituary & Service Information

The family of Nancy Jane Turner created this Life Tributes page to make it easy to share your memories.