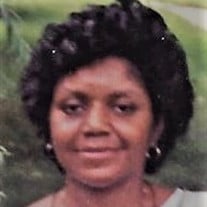 Melvinia Paulette Wright departed this life on Monday, March 14, 2022, at the Inspire Rehabilitation Facility in Washington, D.C. She was born on July 16, 1946 at Freedman's Hospital (now Howard University Hospital) in Washington, D.C. to the late Louisa V. Wright and Eddie Timothy Wright. She attended Howard University and graduated with a Bachelor of Arts degree, consisting of an English major and an Education minor. However, she did not pursue her original goal of teaching English at the high school level; instead, she entered into Federal Service. She briefly interrupted her government service to obtain a Master's degree in Library Service at Rutgers University in New Brunswick, New Jersey. Ms. Wright pursued her love of travel by obtaining a position in South Korea. This effort allowed her to travel to Japan, Hong Kong, and various parts of the southern Korean peninsula. She returned to the continental United States and resumed her Federal Service, retiring after 38 years. She then supplemented that service with twelve years in the private sector. Her subsequent travels took her to the Caribbean and to Europe. Her favorite place to visit was Florence, Italy. She enjoyed many cruises because they gave her a chance to get a brief view of a place before arranging to spend additional time there. However, her advice to others was to travel when you are young so that you can enjoy the many opportunities available to you while you are healthy enough to appreciate and participate in them. She never married and was devoted to her family, consisting of four brothers, their wives/partners and their children. The brothers were David (Doreen), Michael (Philinda), John (Elga), and Sidney (Sa'Mya). She was very involved with and supported the efforts of her many nieces and nephews who survive to cherish her memory. Melvina had exceptional culinary skills. She prepared and hosted numerous holiday meals for her family, and often sent holiday treats to friends. She will also be remembered as a loyal and helpful friend to many, including her closest sister-friends, Vivian Stancil and Sheila Dallas, who have known Melvinia since the age of 5. Ms. Wright was Christian and a member of Ebenezer AME Church in Fort Washington, MD. However, she also attended many services either in person or via Internet at the First Baptist Church of Glenarden.

Melvinia Paulette Wright departed this life on Monday, March 14, 2022, at the Inspire Rehabilitation Facility in Washington, D.C. She was born on July 16, 1946 at Freedman's Hospital (now Howard University Hospital) in Washington, D.C. to the... View Obituary & Service Information

The family of Ms. Melvinia P. Wright created this Life Tributes page to make it easy to share your memories.