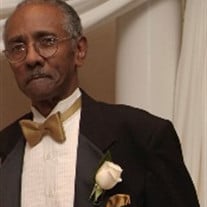 Levi M. Collins, affectionately known as "Milton" was born in Washington D.C. on July 4, 1933. He was the youngest of two sons born to William Harris Collins, Sr. and Ruth Festus Collins. Milton peacefully transitioned to eternal life on October 16, 2021. After a few weeks with the family on round the clock watch, he passed with his daughter Gaye at his bedside. Milton grew up in Northeast Washington, D.C. He was educated in the DC Public School system and graduated from Dunbar High School in 1951. He went on to study music at Howard University and was a member of the Phi Mu Alpha Fraternity. During his days at Dunbar he met and fell in love with a beautiful young lady from Culpeper, VA named Sallie Marie Brock. On October 8, 1955, at her parents home in Culpeper, VA Milton married the love of his life. They were affectionately known as "Milton & Marie." From that union four daughters were born; Elizabeth, Marsha, Gaye, and Laura. A dedicated family man, Milton worked for the Library of Congress retiring after 32 years of distinguished service. In addition, he played the bass as part of a trio at the Market Inn for over 30 years. He also played bass guitar in a band called the Gay Clefs that provided musical entertainment. Milton loved working with his hands. Whether building things from scratch or planting flowers for family and friends, he always helped others in any way that he could. A lifelong member of Jones Memorial United Methodist Church, Milton gave his life to Christ at a young age and placed God first in everything that he did. As a member of the United Methodist Men, in October 2000, Milton was honored for his dedication and service to Jones Church. In 2016 he was recognized for 73 years of active membership. He participated in the missionary ministry, visiting the sick and shut-in. Milton used his love of God and his gift of music to bless the residents at various senior citizen centers. Over the past few years Milton endured several physical challenges but like Job he never complained, questioned God's love, or lost his faith. His favorite scripture was Proverbs 3:5-6: "Trust in the Lord with all Thine heart, and lean not unto thine own understanding. In all ways acknowledge him, and he shall direct thy paths." Milton was a great father, husband, grandfather, great grandfather, uncle and friend. He has joined the ancestors in heaven but he will always remain in our hearts. His legacy will live on through his children, grandchildren and great grandchildren. Milton was preceded in death by his loving wife Sallie, his parents and his brother WIlliam H. Collins Jr. (Billy). He is survived by his four daughters Elizabeth Collins Charles (the late Francois), Marsha Wiggins (Raymond), Gaye Brown (Anthony), Laura Edwards (Newton), grandchildren Zieta (Erick), Sheree (Chris), Jasmine, Anthony (DeMaris), Marcus, Justin, Camille, Gabrielle and Daniel; great- grandchildren Christian, Erick Jr., Zoe, Emily, Raymond Levi, Anthony Zephan, Ivy and Eli. Youtube for the Family https://youtu.be/DN6GNrsONqM Zoom Info Levi M Collins - Memorial Services Time: Oct 22, 2021, 09:00 PM Eastern Time Join Zoom Meeting https://us02web.zoom.us/j/89411674924?pwd=Q2RoTTRQWGh6SXVKdzEycFljdkJkQT09 Meeting ID: 894 1167 4924 Passcode: 1022 Dial in - 1-301-715-8592

The family of Mr. Levi Milton Collins created this Life Tributes page to make it easy to share your memories.

Levi M. Collins, affectionately known as &quot;Milton&quot; was born in...