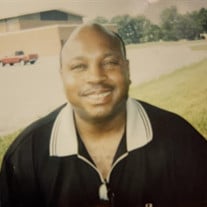 A Blessing of a Father A good father is one of the most unsung, unpraised, unnoticed, and yet one of the most valuable assets in our society. Reflection of Life Lawrence Eugene Robinson Jr. was called home to be with the Lord on March 3, 2022, at Woodbine Rehabilitation Center surrounded by his wife and children. He was born on February 23, 1957, in Washington D.C. to the late Lawrence Eugene Robinson Sr. and Barbara Jean Robinson. He was educated in D.C. Public Schools and graduated from University of the District of Columbia with his Associates Degree in Criminology. After college, Lawrence went on to become a Special Police Officer, Security Guard, and Police Officer for various security companies throughout the Washington D.C. metropolitan area, spanning over 40 years. Lawrence grew up in a military household, where he lived in Japan, Florida, Nebraska, and Washington D.C. As a child, Lawrence was described as reliable, determined, kind-hearted, and a hard worker. As a teenager, Lawrence received certification from the Fifth District Police Department for outstanding service in the Youth Department. He also was in the Air Force Civil Air Patrol on Bolling Air-Force Base, where he took flying lessons to receive a Flying Wings Certificate. Lawrence's hobbies growing up included Martial Arts, Judo, playing the guitar, playing video games, camping, watching television and movies, and playing with remote control cars and aircrafts. Additionally, his interests included history, science, animals, dancing, and exploring nature. As an adult, Lawrence was described as "the life of the party", a great father, husband, and provider, a hard-worker, selfless, courageous, honest, and witty. Those who were close to Lawrence called him "Larry" or "Sugar Bear". Lawrence's family was very important to him, as he helped raise his three siblings, Theresa, Pamela, and Trevell. Lawrence was survived by his loving wife Cheryl, three daughters, Lauren, Melissa, and Linda, and his son Antonio. Lawrence has two grandchildren, Antonio, and Lyric. Lawrence mother Barbara Jean Robinson and the late Lawrence E. Robinson Sr. Lawrence has four sisters-in-law, Lisa, Sharlene, Tina, and the late Linda Cokley. He has three brothers-in-law, Robert, Kevin, and the late Harold Gilbert. He also has five nieces, Nia, April, June, Shaniquewa, and Avionna. Additionally, Lawrence has six nephews, Ian, Robert, William, Khalfani, Ryan, and Khamaal and a host of great nieces and nephews and aunts and uncles.

A Blessing of a Father A good father is one of the most unsung, unpraised, unnoticed, and yet one of the most valuable assets in our society. Reflection of Life Lawrence Eugene Robinson Jr. was called home to be with the Lord on... View Obituary & Service Information

The family of Mr. Lawrence Eugene Robinson, Jr. created this Life Tributes page to make it easy to share your memories.

A Blessing of a Father

A good father is one of the most unsung,...