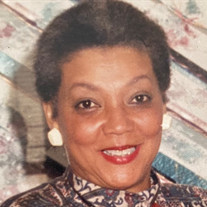 Karen Elizabeth Walker Boddie was born on March 31, 1943, at Freedmen's Hospital in Washington , DC to the late Marjorie Golden Anderson and Loyd Arthur Walker. She is the oldest of 3 children: Arthur Burwell Walker, and Kemba Linda Walker. Karen married Cleo Boddie, Jr. and were blessed with one child Jeffrey Christopher Boddie. Karen grew up in Carver Terrace at 853 21st Street, NE and attended Charles Young Elementary, Brown Jr. High and Spingarn High School 1958-1961. She received her Confirmation at Calvary Episcopal Church. Her younger years were filled with ballet and Girls Scouts. Karen's eye for fashion started in high school, where she designed and made her own clothes due to her height. Always looking at magazines and people watching, she created some amazing designs. She joined Tracy's Mannequins in the late 60's and modeled with them for 10 years. After declining an offer from Vogue Esquire because the job required a great deal of traveling and she didn't want to leave her young son Jeffrey, Karen was often asked to commentate local fashion shows. She was quite familiar with designers, fabrics, textures, colors etc. and used colorful descriptions of styles and models as they walked the runway. Karen made Atlanta, GA her second home where she spent more than half her adult life their (35 years). She loved to thrift shop and play cards. Karen was a life member with The Order Of The Eastern Stars for over 20 years with Joppa Temple & Electa Grand Chapter. She served in several chapters (Daughters of Tyre Chapter #349, Diamonds of Atlanta, Sister of Peace) just to name a few. Throughout her life as an Eastern Star, Karen sat in several Grand seats with Electa Grand Chapter. Her favorite was sitting as Queen Esther. Karen inspired a lot of young women with the service that she gave to the community. Karen was also a Past Worthy Matron who trained and mentored several sisters in various areas of being a good Eastern Star. Whenever a sister needed to talk, she would be there. Karen was a pillar to all the sisters in the Eastern star world. Karen's charity work ranged from doing the March of Dimes walk, Susan B. Anthony Breast Cancer, The Saint Jude walk, feeding the homeless, etc. When it came down to knowing what it truly means to be a sister Karen was that sister. Karen exemplified all 5 points of being an Outstanding Eastern Star. Left to celebrate her life and cherish her memory are her loving son Jeffrey C. Boddie (Tonya), her grandchildren Justin, Daniel and Sasha, her brother Arthur and sister Kemba, Aunt Joan Anderson, many nieces and nephews, great nephews and nieces, a host of other relatives and her best friend Yvonne Conway along with many other friends.

The family of Karen Walker Boddie created this Life Tributes page to make it easy to share your memories.