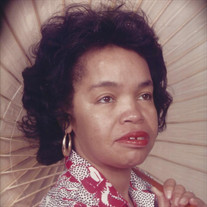 Joyce Elease Simms was born October 24, 1941 in Washington, DC to the late Louise Tillman (Blackstone) and Andrew Tillman. Joyce departed this life to go to her heavenly home on May 8, 2022. Joyce spent time in Charlotte North Carolina where she attended public school and spent time working on a relative’s farm. Upon returning home to Washington, DC, she attended Shaw Junior High School. Joyce worked for the DC Public Schools System as a Cafeteria Helper at Walker Jones Elementary School in North West, Washington, DC for 25 years before retiring in April of 1997. She enjoyed her time working at Walker Jones Elementary School. She also spent some time training as a beautician and she became the person to go to for a nice press and curl. Joyce became a devout Christian who loved the Lord and it tempered every aspect of her life. She believed strongly in the Lord’s commandment to forgive and she would make it a point to share this. Joyce was a founding member of Eternity Baptist Church in Landover Maryland. Eternity Baptist Church was her second family and home. She greatly loved her Eternity Baptist Family. She served on the Choir and as an Usher, and would sometimes play the keyboard to accompany the choir. Serving the Lord brought her so much joy that she would lend a hand wherever she could in Eternity Baptist Church. Joyce was a prayer warrior who knew God’s word, applied it to her life, and who demonstrated a life of Christian faith through her work. Joyce’s character of love, strength, dignity, patience, kindness and generosity is her legacy, and it is a legacy that will endure for all time. Joyce is survived by her Sister Urseline D. Thomas and Half Sister Shirley McCants; Daughters Elaine C. Washington and Zina M. Ellison, and Step Daughter Tracy Short; Son William A. Simms; Son-in-laws Vinson Washington and Jeffery D. Ellison, Daughter in-law Sofia Simms; Granddaughters Charity Crockson, Breanna V. Simms, Amena E. Simms, and Amelia J. Simms; Great-grand daughter MacKenzie Crockson; Grand-daughter-in-laws Lashanna Washington and Semhal Washington; Grandsons Vinson Washington, Jr., Brennon A. Simms, Yakob Simms and Jeffery D. Ellison, II; Grandson in-law Devron Crockson; Great-grandsons Carlos O. Washington, Jr., and Yonathan Washington; and a host of nieces, nephews, cousins, loving friends and associates. Joyce is preceded in death by her Mother Louise Carter Blackstone and Father Andrew Tillman; Sister Gloria Hodges; Brothers Sidney Tillman and Louis Tillman; and Grandson Carlos O. Washington

Joyce Elease Simms was born October 24, 1941 in Washington, DC to the late Louise Tillman (Blackstone) and Andrew Tillman. Joyce departed this life to go to her heavenly home on May 8, 2022. Joyce spent time in Charlotte North Carolina where... View Obituary & Service Information

The family of Ms. Joyce Elease Simms created this Life Tributes page to make it easy to share your memories.