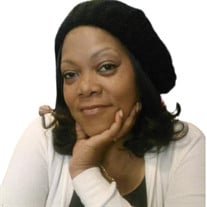 Josie Louella Sampson Brown was born in Bronx New York March 7, 1960, the 5th of 6 children born to Leo D. Sampson and Rose Birdie Sampson. God surrounded her in a loving embrace and enthusiastically welcomed His child to her Heavenly Home at 1:15 pm on April 20,2022. Josie was educated in the New York City public schools and attended The Fiorella High School of Music and the Arts. She graduated from Bowie State University in 1997, earning her Bachelor of Science in Business Administration. During her early years while living in New York, she attended Abyssinian Baptist Church and was active in Sunday School programs there. Josie and John N. Brown were married and later divorced but from this union 1 child was born, her beloved daughter Charlyce Brown. Josie was ecstatic to be a mother especially after being diagnosed with endometriosis and told she would not be able to conceive. She was a loving, kind, devoted mother who was fiercely protective of her little girl. Charlyce and Josie shared an unbreakable bond between devoted mother and devoted daughter. They cared tirelessly and lovingly for one another. Josie was blessed with many gifts including intelligence, creativity, and athleticism. She used all her gifts throughout her employment years and in service to her church. Josie had exceptional bookkeeping and accounting skills, which were much appreciated during her employment with the Center for Strategic and International Studies, a nonpartisan think tank (CSIS), until in 2013 illness required her to cease employment with the organization. In addition to her work-related duties and service within the ministry, she gave of her time and talents to assist people in many capacities. As an educator, she valued knowledge and did all she could to ensure others had the necessary information they needed. She helped many people in getting documents for financial assistance, filing taxes, and applying for benefits. She also frequently opened her home to those in need, offering shelter, love, and guidance. Josie loved the water and was a competitive and gifted swimmer dating back to elementary school age. When she was 12 years old, she joined the 21 Swim Team where she met life-long friend Tomas Andino. She was awarded gold and silver medals for her swimming athleticism in the Harlem Olympics. Josie nurtured a life-long passion for the water, which she enthusiastically shared with her daughter. Every summer Josie found her happy place floating in the pool or relaxing on the beach with family and friends. Josie was an extraordinary swim instructor and she made it her personal mission to teach anyone who desired to learn, how to swim. Josie had many hobbies and talents. She was prolific in her creative abilities which included, song, dance, hair, make-up, and nail styling, clothing design and creation, decorations of all kinds, and liturgical dance. Josie could sing as well!! She was an avid crafter and was constantly working on new projects. She enjoyed sewing, painting, crocheting, designing T-shirts, and working with a variety of materials to create beautiful pieces under the banner of Chollie’z Dreamz and Inspirations, a business she created inspired by her late sister Charlyce Sampson. Josie began working at the United States Postal Service in 1986 during which time she met Sandra Foster who began to minister to her and invited her to join bible study under the guidance of the late Bishop Juanita E. Turner. She fell in love with the wisdom, knowledge, and thorough teaching of the word of God. She gave her life to the Lord. Having been born again, Josie was water baptized at the New Covenant Church of the Lord Jesus Christ in 1990, where she continued to grow in grace. She received the baptism of the Holy Spirit with the evidence of speaking in tongues. Josie was a dedicated Christian and chose to be a servant leader using her many gifts in service to her place of worship. When Josie joined the New Covenant Church of the Lord Jesus Christ, it became her church home and family. As a member of this congregation, she held many titles and played many roles in the ministry. She was a teacher and administrator of extracurriculars at the New Covenant Christian Academy (NCCA). She loved dance and worked alongside Marlon Mckeiver with the NCCA Liturgical Dancers, putting on beautiful and inspiring productions. She worked with the cheerleaders and oversaw the school’s summer enrichment program for many years. Josie was Director of the Adult Education Department and a teacher at New Covenant Church, fulfilling the role of administrator for classes and weekly bible study. She served on several of New Covenant’s ministries including the Hospitality Ministry, the Music Ministry – both the NCC Praise Team and the Ensemble Choir. She also danced with the NCCLJC Caleb Dancers. She industriously put her hands to the plow in making dance attire, flags, billows, and other items of praise. She assisted the youth department, participating in events and chaperoning trips. She was a fervent Prayer Warrior in the Intercessory Prayer Ministry and as a Woman of Destiny, willingly shared her testimonies and encouraged other Kingdom Women in their walk. She loved the Lord, believed in God’s word and held on to His promises. Josie loved her God, her church, and her family especially her beloved daughter Charlyce who was her life. She leaves to mourn a loving family: Her only child a beloved daughter Charlyce Brown; one brother Leo Sampson, two sisters. Wendella Nisbett, Lenora Sampson Smith: three nephews Julius P. Williams III, David Ward, Malcolm A-J. Williams; four nieces Tamaqua Nisbett, Jinelle Nisbett Ward, Ariel N. Williams, Chelsea Cummings Williams; 4 great-nieces Janaye Raghnal, Kamryn Holley, Micheala Ward, Kymari Ward,1 great-nephew David M. Ward, Jr.; and a host of relatives and friends. She is predeceased by: Siblings Charlyce B. Sampson and Carlton B. Sampson Sr., parents Leo D. Sampson and Rose Birdie Sampson, and nephew David Keith Nisbett II Hard working hands now at rest God broke our hearts to prove to us He only takes the best Done in sorrow The Family

Josie Louella Sampson Brown was born in Bronx New York March 7, 1960, the 5th of 6 children born to Leo D. Sampson and Rose Birdie Sampson. God surrounded her in a loving embrace and enthusiastically welcomed His child to her Heavenly Home at... View Obituary & Service Information

The family of Josie Louella Sampson Brown created this Life Tributes page to make it easy to share your memories.