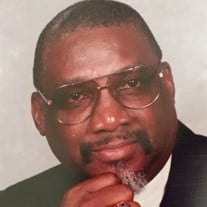 On Sunday, July 18, 2021, Joseph I. Treakle was called home at the age of 82. Therefore, we honor a great son, brother, husband, father, and friend. Joseph was born in Reidsville Virginia, to Irvin and Hartence Treakle. As a young boy he earned the nickname “Cobs” from his family and childhood friends. Joseph began working on a steamer fishing boat at the age of 17 before relocating to Washington, DC. He worked in the construction field before landing a position as an Engineer with the Alexandria City School Board. Joseph retired from the School Board in 2004, after 43 years of faithful service at T.C. Williams High School. In 1983, Joseph married Ivory Lee Patterson, and decided to stay settled in the St. James community in Southwest DC where they first met; and where Joseph was a resident and member for over 60 years. Joseph was an active member of the Mecca Temple #10, where he was a participant on the drill team and competed in annual national competitions. He joined Friendship Baptist Church and attended for over 50 years, serving on the usher board and maintenance team. Joseph is survived by his loving wife of 37 years, Ivory Treakle, sister, Earlene Nutt, daughter, Marcell and husband Levern Butler of Killeen TX, stepson, Edward and wife Pam Patterson of Mechanicsville, VA, stepdaughter Tina and husband Al Taylor of Clayton, NC; five grandchildren, Tekia Butler, Lamont Butler, Corey Butler, Daniel Patterson, and Ivory Taylor; nieces, nephews, and a large extended family. He was preceded in death by his parents Hartence and Irvin, and his sister Barbara Treakle. Visitation will be Tuesday, July 27th at 10:00 am with a celebration of life service beginning at 11:00 am at Pope Funeral Home, 5538 Marlboro Pike, Forestville, MD 20747. Interment will be at Cedar Hill Cemetery, 4111 Pennsylvania Avenue, Suitland, MD 20746.

On Sunday, July 18, 2021, Joseph I. Treakle was called home at the age of 82. Therefore, we honor a great son, brother, husband, father, and friend. Joseph was born in Reidsville Virginia, to Irvin and Hartence Treakle. As a young boy he... View Obituary & Service Information

The family of Joseph I Treakle created this Life Tributes page to make it easy to share your memories.