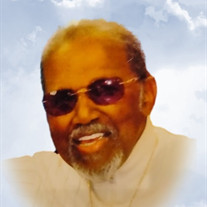 John Francis Holmes was the sixth son of the late Blanche B. Smothers and Randolph V. Holmes.John was educated in the D.C. Public School system and completed his education at Armstrong High School. He joined the U.S. Marine Corp in 1953 and was discharged as a Sergeant in 1957. John worked for St. Elizabeth’s Hospital for a short time and was employed by the Department of Commerce at the National Oceanic Atmospheric Administration (NOAA) and the Department of the Army Map Service. He retired after 38 years of Federal Government Service.John met and married his devoted wife Roslyn C. Ray (59 blissful years) in 1962. From that union are his children Quintin Leon, John Dietrick (Jorgenia) and Monica Marie Holmes.As a child, John was baptized at St. Vincent DePaul and made his First Holy Communion at the Old St. Cyprian Catholic Church. He joined Our Lady of Perpetual Help (OLPH) Roman Catholic Church in the 70’s after returning to the District of Columbia and Maryland area to live and raise his family. John was a devoted Catholic and worked faithfully in the OLPH Health ministry as a volunteer worker in the Panorama Room, either in the kitchen or outside around the church wherever there was a need for help. He was a member of the Men’s Club, served on the New Year’s Committee, and helped out on Monday nights at the popular Panorama Room bingo. John made his (129) Cursillo Weekend Retreat in 1991 an event he never forgot and cherished the rest of his life. Such a wonderful gathering of people and friendships and getting to know God and self. He was also an active member of the Marlow Heights Bowling league for many years before his decline. John Francis Holmes was called home to his eternal reward on Wednesday, August 18, 2021. John leaves to cherish his wife Roslyn, and his children Quintin, John, and Monica Holmes. Grandchildren: Andrae Wiggins, Avery, Isis, Theresa, Christiaan and John Easton Holmes. Great-grands: Alex Wiggins and Kazamir McGee. He was preceded in death by his brothers: Randolph V., Dietrick A., Bernard J., Melvin C., Robert J. and Paul L. Holmes and Sisters: Viola Hill, Bernice Wiley, Thelma Hurley, Betty Ann, and survived by only living sibling Shirley Leary. He also leaves a host of nieces, nephews, cousins, loved ones, and friends. Knights of Columbus Obituary Notice: Brother John F. Holmes was a dedicated 3rd Degree member of Immaculate Conception Shrine Council 4944 served his council faithfully for over 30 years in positions of leadership, while participating in many programs and events, thus enabling Shrine Council 4944 to receive much recognition for service, while promoting the principles of charity, unity, fraternity, and patriotism. Through years of outstanding participation, brother Holmes achieved Life Membership, ultimately becoming a Knighted and dedicated member of the Patriotic 4th Degree as a Sir Knight, “the Visible Arm of the Knights of Columbus,” of Washington Assembly 151, “the Oldest Assembly in the Archdiocese.” May Sir Knight John F. Holmes rest in peace for a life well served as a member of the Knights of Columbus

John Francis Holmes was the sixth son of the late Blanche B. Smothers and Randolph V. Holmes.John was educated in the D.C. Public School system and completed his education at Armstrong High School. He joined the U.S. Marine Corp in 1953 and... View Obituary & Service Information

The family of Mr. John Francis Holmes created this Life Tributes page to make it easy to share your memories.

John Francis Holmes was the sixth son of the late Blanche B....