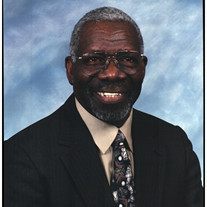 John Frederick Friday, Jr. the second of three children was born November 30, 1934 to the late John and Masrener Friday in Timmonsville, South Carolina. He transitioned peacefully to eternal rest March 1, 2022. In addition to his parents, his sister, Georgiana Madkins and brother, Ephriam Friday preceded him in death. He received his formal education in the Florence County Public School graduating from Brockington High School May 1953. Following high school, John attended South Carolina State University. John served his county by enlisting in the United States Air Force. He was assigned to various duty stations in the United States and overseas. John received an honorable discharge October 1957. John relocated to Washington, DC in the early sixties. He was employed as a Welfare and Food Stamp Fraud Investigator retiring in 1992 after thirty years of service. John was not a person to sit at home too long and was hired at the Modern Liquor Store in Temple Hills, Maryland. He was a very dependable employee for seven years. John was a very social and likeable person. He "loved" bowling, playing cards, trips to the Casino and travelling, especially with the Knights of St. John International and AARP Chapter #3473. John was member of several bowling leagues. He truly enjoyed the game and socialization encouraging many of his friends to join leagues. John was also a member of Our Lady of Perpetual Help Church Hilltoppers Social Club. John was also a "diehard" Redskins fan. John possessed excellent culinary skills, especially barbeque ribs, cabbage, ham, fried potatoes and several other delicious soul food dishes. At an early age, he was baptized at Bethlehem Baptist in Timmonsville, South Carolina. A friend, Michael Marshall, encouraged John to participate in the Rite of Christian Initiation for Adults (RCIA). Pentecost Sunday 1998 John joined the Church of the Incarnation. September 1998 John became a member of Incarnation Commandery #296, Knights of St. John International. He was a Past Second Vice President, Past First Vice President and Past President. At the time of his death, John served as a Trustee. He was a dedicated and proud Knight advancing to the rank of Colonel. For outstanding service to the Order, John received the Baltimore Washington Grand Knight of the Year Award in May 2012. He also represented Commandery #296 as a Delegate to the Knights of St. John International Supreme Convention. John was a recipient of the Knights of St. John Fourth Degree. May 2010 he was awarded the Knights of St. John Noble Degree. He was an active member of the Incarnation Holy Name Society and the former Red Circle Club. John had a sweet, gentle demeanor and was truly loved!! He leaves to cherish precious memories his devoted wife, Anna H. Friday; son, Kevin Friday; daughter, Kathy Jones; four grandchildren, Denise Quigley, Shawnice Quigley, De'AnJilo Platt-Friday, Ja'Nell Friday. Two sisters-in-law, Othalene Williams and LaTaunya Darden (Lorenzo); mother-in-law, Betty Hamer and a host of nieces, nephews, other relatives and many wonderful friends. He also leaves to mourn a "special daughter", Celeste Moore. The family will receive friends 9:45 a.m. followed by the Mass of Christian Burial at 11 a.m. Tuesday, March 15 at the Church of the Incarnation, 880 Eastern Avenue, NE. Washington, DC 20019. Interment Mt. Olivet Cemetery. In lieu of flowers the family is requesting donations be made in John's memory to the Alzheimer's Association, Post Office Box 96011, Washington, DC 20090-6011. Live Streams Links are listed below : Youtube - https://youtu.be/pCOG6mc3iI0 Zoom - https://us02web.zoom.us/j/81974362816?pwd=bWhSOEx3emtEaWhNL1NjMCtISTlaUT09 Meeting ID: 819 7436 2816 Passcode: 0315 Dial by Phone - 1-301-715-8592

John Frederick Friday, Jr. the second of three children was born November 30, 1934 to the late John and Masrener Friday in Timmonsville, South Carolina. He transitioned peacefully to eternal rest March 1, 2022. In addition to his parents, his... View Obituary & Service Information

The family of Mr. John Frederick Friday Jr. created this Life Tributes page to make it easy to share your memories.