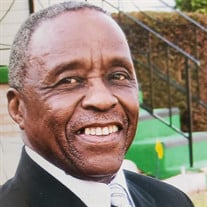 JESSIE LEON SIMMONS JR. of Forestville, MD entered into eternal rest on Wednesday, September 22, 2021. He was born to Jessie L Simmons, Sr. and Janie Bell Richardson on March 1, 1931 in Charleston SC. He attended the public schools of Charleston and is a graduate of Burke High School. Mr. Simmons accepted Christ at an early age and joined Central RMUE Church in Charleston, SC. In 1951, he enlisted in the United States Air Force serving 26 years of active military service. He retired in Frankfort, Germany in 1978 and remained there until December 1991. After returning to the states, he moved to Forestville, MD and lived here until his passing. Those left to cherish his memories are his sisters, Mildred Chapman and Deborah Washington of Charleston, SC and Elaine Demu of Flushing, NY; brothers Melvin Simmons of Bronx, NY, and Charles Simmons of Orlando, FL; his dear and devoted long-time friend, Dolores Richards; and a host of nieces, nephews, other relatives, and friends. He is preceded in death by his sisters Odell White and Christine Hartfield and brothers-in-law Robert Chapman Sr. and John “Johnnie” White Sr. Memorial service will be held on Monday, October 4, 2021 beginning at 1:00 pm at Pope Funeral Homes FV Chapel - 5538 Marlboro Pike, Forestville, MD 20747. Details for Memorial Service that will be held in South Carolina will be on Saturday, October 9, 2021 beginning at 11:00 am at Central Reformed Methodist Union Episcopal Church - 117 President St., Charleston, SC 29403. Interment to follow at Sunset Memorial Gardens - 2915 Ashley Phosphate Rd, N Charleston, SC 29418

The family of Mr. Jessie Leon Simmons, Jr. created this Life Tributes page to make it easy to share your memories.