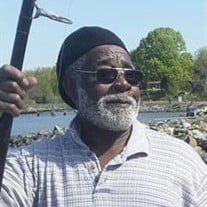 Jesse was born on December 9, 1943 in Engelhard, North Carolina to the late Jimmy and Delia Midgette. God called our beloved Jesse home on Friday, March 12, 2021, he went peacefully to be with the Lord after a lengthy illness. Jesse siblings are T.L. Midgette of Walstongburg, NC and Timothy Midgette of Raleigh, NC. He was predeceased by his sister, Dora Midgette-Blount and brothers Jimmy Midgette and Joe Midgette. Jesse attended Public School in North Carolina, were he acquired trade skills. He enjoyed watching westerns, fishing, playing baseball and listening to down home Blues. Jesse had a tinkering spirit, he could fix anything, he was a natural. After graduating he joined the United States Army. Later he worked for DC Park and Recreation as a landscaper supervisor. Which he retired after 25 years of service. Jesse then worked for Centennial One as a night shift maintenance operator where he maintained several work sites. Jesses high motor for excellence drove him to another life journey when the average person would be relaxing in retirement, "No" not Jesse he goes and join the Maryland Health Department as a maintenance supervisor. Due to his decline health he had to retire. During his 2nd retirement he remained active cultivating life lessons with his grandson on multiple projects. He also enjoyed working outside around his home with his family. He continues to go on fishing trips with friends and family. But no one can forget those family fish fries, and crab feast he hosted. Jesse loved his snacks; he would grab some and go to his room to watch old westerns until the wee hours of the morning. His wife Mary would wake up by the sounds of gunfire coming from TV and Jesse would be sound asleep. Jesse married the love of his life Mary on January 8, 1990, and they have been married for 30 years. During this union they had two daughters Romania and Yolanda. Jesse leaves to cherish his memory, his wife Mary, one son, Aaron Midgette; three daughters, Nicole Midgette, Romania Gadson (Randy); Yolanda Davis; two grandchildren, Keith and Keyonie McNear; a great grandson, whom he loved to pieces, Kalani (Fatman) Logan; one brother-in-law Charles Mack (Cawanna); one sister-in-law, Sylvia Davis-Smith and a host of nieces, nephews, and other relatives and friends. Services will be held Monday April 5, 2021 at Pope Funeral Homes - Forestville Chapel. Viewing will begin at 10:00 am until time of service at 11:30 am. Interment will be at Maryland Veterans Cemetery located at 11301 Crain Highway, Cheltenham, MD 20623

Jesse was born on December 9, 1943 in Engelhard, North Carolina to the late Jimmy and Delia Midgette. God called our beloved Jesse home on Friday, March 12, 2021, he went peacefully to be with the Lord after a lengthy illness. Jesse siblings... View Obituary & Service Information

The family of Mr Jesse Harold Midgette created this Life Tributes page to make it easy to share your memories.