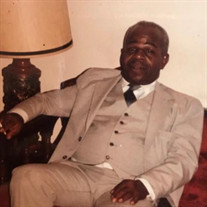 .THE LIFE & LEGACY OF Henry Edmond Lindsay, Sr. was born in Badin, North Carolina on September 9, 1922 to parents Ethel Mae Cotton-Lindsay and Grover Cleveland Lindsay. He was the last of his 5 siblings to pass from us, they are: Eloise Lindsay Cleveland Lindsay, Jr., Caroline Lindsay-Wilson, Rachel Lindsay, and Francis Lindsay. He grew up in Badin, NC and attended Badin County School, then later took a furniture upholstery class. He spent most of his time in Rockwell, NC and worked in a brickyard there for approximately 2 years, then moved to Washington. DC in 1942 when he was 20 years old. He worked there as a dish washer, then within the baggage handling department at Union Station, then began a 35 year career with the United States Government Printing Office as a Fork-Lift operator, and retired in 1977. Henry was a Veteran with Honorable Discharge for military service to the United States Army during World War II. He was stationed in the Soloman Islands, New Guinea, and the Phillipine Islands. He married Annie Elizabeth Rogers in 1947. He was a church member at Congregational Methodist Episcopal Church in Capitol Heights, Maryland for over 15 years. He attended services there regularly until his health declined. He leaves behind3 children Sylvester Lindsay, Deborah Lindsay Holmes-Jackson, Eudora L. Harvey; Gwendolyn Lindsay (deceased), and Henry Edmond Lindsay Jr. (deceased); Grandchildren: Tracie Brashears, Sylvester A. Lindsay, Jr., Stanley C. Lindsay, Sr., Demone' L. Lindsay (deceased), Elishauntae K. Lind- say, Maisha I. Green-Bey, Michelle A. Holmes, Merilyn C. Holmes, Bernard K. Jackson, and Marlena Renee Jackson (deceased) and Gerard U. Finney; Great-Grandchildren: Michelle Holmes, Najee Fuller, Basir Fuller, Nia Bowman, Mya Bowman, James Bowman, Kellington Jackson, Brianna Mont- gomery, Asia Montgomery, Ta'aya Wilson, TreBor Pollard, Zalhma Lindsay, Shawnette Lindsay, Stanley C. Lindsay, Jr.; Great-great grandchildren, nieces, nephews and a host of other family members and friends. Henry Edmond Lindsay, Sr. will be remembered as a wise, warm, generous and spiritual man who loved GOD first and greatly loved his family and friends. He would always listen attentively and give pearls of wisdom to those who needed advice. Although he was a gentle man, he was a fighter who would always stand firmly on his beliefs and convictions. He was a man who practiced what he preached and a positive, shining example for all who knew him.

.THE LIFE & LEGACY OF Henry Edmond Lindsay, Sr. was born in Badin, North Carolina on September 9, 1922 to parents Ethel Mae Cotton-Lindsay and Grover Cleveland Lindsay. He was the last of his 5 siblings to pass from us, they are: Eloise Lindsay Cleveland... View Obituary & Service Information

The family of Mr Henry Edmond Lindsay created this Life Tributes page to make it easy to share your memories.