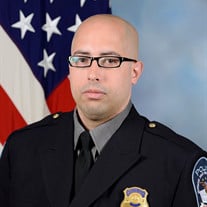 George Gonzalez Obituary George Gonzalez, 37, was tragically killed in the line of duty on the Pentagon bus platform on August 3, 2021. He served as a police officer with the Pentagon Force Protection Agency for three years and took his mission of "protecting those who protect our nation" to heart. He was promoted twice and attained the rank of Senior Officer in 2020. He was highly respected by his fellow officers. George was a native of Brooklyn, New York, and graduated from New York City's Canarsie High School. George devoted his life to serving his country in the military and as a law enforcement officer. He served with the Federal Bureau of Prisons, the Transportation Security Administration, and the U.S. Army, prior to serving with PFPA. George served in the Army and Army Reserve for 8 years, attaining the rank of Sergeant. He deployed to Iraq in 2004, where he was awarded the Army Commendation Medal Iraq Campaign Medal with campaign star and the Global War on Terrorism Service Medal. George's other military awards and decorations included the Army Achievement Medal, Korean Defense Service Medal, Army Service Ribbon, Overseas Service Ribbon, Combat Action Badge and Meritorious Unit Commendation. George once posted on Facebook: "We may not completely blaze the trail we want, but the question is, will we be happy with the trail we leave behind?" George was a trail blazer who embodied integrity and service to others. He had a deep respect for members of the military and law enforcement who lost their own lives serving their country. George was one of the good guys with a big heart and will be missed dearly. He had an infectious personality and was fiercely loved by his family and friends. He loved his country, his family, and the Yankees. His family is very proud of the life he lived. George was preceded in death by his father, Jorge Rubert, November 17, 2020. George is survived by his mother, Oneida Gonzalez; his brother, Rodney Rubert; his sister-in-law, Beyris Rubert; and his girlfriend, Kareena Quinn. In lieu of flowers, the family has set up a memorial fund to honor their son and brother at, : https://gofund.me/89246552

George Gonzalez Obituary George Gonzalez, 37, was tragically killed in the line of duty on the Pentagon bus platform on August 3, 2021. He served as a police officer with the Pentagon Force Protection Agency for three years and took his mission... View Obituary & Service Information

The family of GEORGE GONZALEZ created this Life Tributes page to make it easy to share your memories.