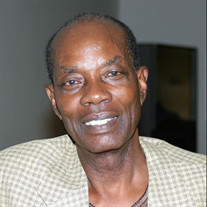 George Adamah Armah was born on May 25, 1936 into the union of George and Mercy (Odametey) Armah in Calabar, Nigeria. He was the third child/first son of their eleven children. While still a young child, he and his family moved to Accra, Ghana where he completed Gold Coast National Schools before gaining employment at United Africa Company Motors. George enjoyed life and did the things he loved - including working in auto and training others in auto repair and singing. He sang in his church choir and was also lead singer in a band that entertained audiences across Ghana. He was a fan favorite and reveled in singing songs by his idol, Louis Armstrong. When George immigrated to the US, he trained as a lead mechanic for luxury import automobiles at American Service Center. On May 22, 1965 he continued giving life to his dreams by marrying the love of his life and long-time companion, Peggie. Together they raised five children. In 1980, George’s father passed while his mother was visiting him in the US. He returned to Ghana with her to attend the funeral and perform his duties as “first son”. After coming back to the States, George opened Globe Motors, his auto repair business specializing in Mercedes Benz cars. At that time, it was the only one of its kind owned and operated by a person of color – this distinction resulted in a feature article published in the Washington Post. George’s diagnostic abilities were legendary. He could identify auto issues by listening to the engine over the phone. Local dealerships would send cars to him when their own mechanics were unable to determine the repair problems. These skills, among others, earned George the nickname “Dr. G”. Dr. G became the auto repair technician of choice for regular and high-profile clientele, alike. His customers came from all walks of life and included a local radio personality, a DC mayor and various other government officials – many of whom would travel from afar for his services and often came bearing gifts. George was more than willing to share his knowledge with others. He trained several up-and-coming mechanics who went on to open thriving businesses of their own. George, who became a naturalized American citizen in October 1998, departed this life in the early morning hours on Thursday, January 13, 2022. He was preceded in death by his parents and his brothers J.T. and Emmanuel Armah. He was a beloved brother to Elizabeth Armah, Sarah Armah, Suzy Kessie, Rebecca Duodu, Lily Bassey-Asuquo, Comfort Botchway, Jacob Armah and Emelia Amaar-Cofie. George is survived by his wife, his children: Renea Everage of Stockbridge, GA, William Armah and Stephen Armah of Washington, DC, Merci Armah of Mitchellville, MD and Omega Armah of Germantown, MD.; his aforementioned sisters and brother of Accra, Ghana; his grandchildren: Lamley Armah-Lee (and husband Clarence Lee, IV), B.J. Armah, Devon Everage, Dontae Armah, Alexis Armah, Simone Armah, Naima Armah and Gabrielle Armah; and great grandchildren: Saniya Lee, Maya Everage, Clarence Lee, V and Zachary Shilley; and a host of other relatives and friends.

George Adamah Armah was born on May 25, 1936 into the union of George and Mercy (Odametey) Armah in Calabar, Nigeria. He was the third child/first son of their eleven children. While still a young child, he and his family moved to Accra, Ghana... View Obituary & Service Information

The family of MR GEORGE ADAMAH ARMAH created this Life Tributes page to make it easy to share your memories.