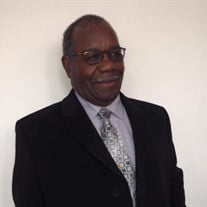 Franklin (Frank) Roosevelt Jones, affectionally known to family as "Tick", was born on October 3, 1937 to the late James Arthur Jones and Essie White Jones. He peacefully departed this life on Thursday, October 28, 2021 at his home. Frank... View Obituary & Service Information

The family of Franklin Roosevelt Jones created this Life Tributes page to make it easy to share your memories.