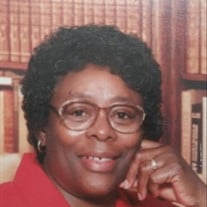 Esther Vernell Fields Moore, daughter of the late Matthew and Cloura Lee Fields, was born on December 2, 1935 in Goldsboro, North Carolina (Wayne County). She was the 2nd oldest of four children. Esther accepted Jesus Christ as her personal savior at an early age at the Hooks Grove Missionary Baptist Church in Pikeville, North Carolina. In her later years, she united with Cornerstone Baptist Church in Temple Hills, Maryland. She served faithfully for years as a Sunday School Teacher, an Usher and as a Nurse on duty for the church. Esther completed nursing school and began her career as a registered nurse. She worked at several hospitals in different states before retiring from her job as a psychiatric nurse at Saint Elizabeth’s Hospital in Washington, D.C. She retired on March 31, 1989 with 22 years of service. She enjoyed sewing, reading and watching sports. She grew to love tennis – especially routing for the Williams’ sisters. On December 26, 1959, Esther married Frank Donald Moore and to that union a daughter and son were born, Vanessa and Darryl Moore. Since 1984, Esther courageously navigated through several major health issues. She was sustained through it all by her unwavering faith in God. Esther continues to be victorious because she is united with her Savior, Jesus Christ – the Giver of Eternal Life! Esther leaves to cherish her memory, her devoted, loving husband of 62 years, Frank D. Moore; one son, Darryl R. Moore; daughter in law, Stephanie Moore; three granddaughters, Vanessa, Courtney, Taylor; seven nieces and nephews, Donette (Reggie), Yolanda, Scott, Roger, Patricia Jean, Wanda and a host of many more loving family members and dear friends – too many to name here. In addition to her parents, Esther was preceded in death by her daughter, Vanessa Lynn Moore (02/1994).

The family of Esther Vernell Moore created this Life Tributes page to make it easy to share your memories.

Esther Vernell Fields Moore, daughter of the late Matthew and...