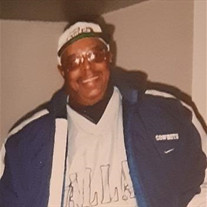 Earl Rudolph Anderson, Sr., affectionately known as Poppy Anderson, peacefully passed away in his sleep on Tuesday, December 28, 2021. Earl was born September 23, 1934, in Salem, New Jersey, to Milton and Thelma Anderson. Thelma later married Charlie Brown who raised Earl as his son. Although the only child of that union, he had three first cousins, Rachel, Janet, and Barbara Anderson, who he affectionately called his “sisters”. Earl attended public school in Salem, NJ. After graduating from High School, he joined the military in 1952 and served in the United States Air Force until 1975, retiring as a Staff Sergeant from Andrews Air Force Base. After retiring from the military, Earl served as a manager for Murray’s Steak House, a manager at a couple of furniture warehouses, and as a security guard for Light House Security. He also served as Trustee for the Washington Yacht Club. Earl's memory is cherished by his wife, Janet Carter-Anderson; his daughter, Gail Sutton (William), his sons: Earl Anderson (Barbara), Juan Anderson, Joel Anderson, Todd Anderson, and Joseph Carter; his “sister”, Rai Schweke; a niece, Stephanie Johnson; 8 grandchildren, 12 great-grandchildren, one great-great-grandchild, and a host of other family and friends. Interment will be held at Arlington National Cemetery (Date to be Determined)

The family of Mr. Earl R. Anderson created this Life Tributes page to make it easy to share your memories.