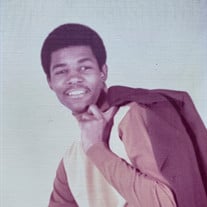 David Ford-Gould, of Washington, DC, passed away on April 9, 2022 from meningitis. He was born in Washington, DC on July 14, 1951. From the ages of four to nine, he lived in Spotsylvania County Virginia, where he attended John J. Wright Consolidated school. Thereafter David remained a resident of Washington, DC, graduating from Anacostia High School in 1969 and studying at Howard University from 1971 to 1973 majoring in Mass Communications/TV & Film. He also attended Washington Technical Institute and graduated from Barre Modeling and Finishing School in 1970. His career began as a Clerk at the Pentagon in Arlington, Virginia under the DC Summer Job Youth Program. Thereafter he worked as a Desk Clerk at the Shoreham Hotel, a Documents Receipts Clerk at the Government Printing Office, a Desk Attendant at the Library of Congress, an Administrative Assistant in the Main Chapel Operations at St. Elizabeths's Hospital and as a Case Management/Front Desk Assistant at the DC Department of Behavioral Health, Mental Health Division until his retirement in 2015. He was focused, hardworking, outgoing and loved by his fellow co-workers. After retirement David frequented the Congress Heights Senior Wellness Center where he was welcomed and enjoyed the fellowship. David thought fondly of his country upbringing where he enjoyed vegetable and flower gardening and was instilled with solid individual, family and community values. He attended Mt. Zion Baptist church where he sang in the choir. As an adult, David was a proud man who followed in the footsteps of his father and dressed appropriately for the occasion. Each time you saw him he was meticulously groomed, stylishly dressed and strode confident and proud. Not surprisingly, he briefly pursued a modeling career and was chosen as a debutante escort. He was a man of God and was always on a mission to accomplish his goals. He loved listening to music and collecting fine wine. He practiced healthy eating and exercise maintaining his high school physique throughout his life. Although he lived independently and did not see them as much as he wished, his love for family never wavered. He spoke proudly of his tall handsome brothers. When he was in the presence of his sisters he was protective and endearing. His sister Cynthia and nephew Tyjuan A. Gould provided many years of support to David. They were his guardian angels in the family. Despite his enormous struggles with mental illness, David fought for and maintained his autonomy. Against all opposing winds, he was the "captain of his own ship". David is the son of Juanita W. Gould and Wilbur R. Ford, both deceased. His siblings Constance Turner and Wilbur R. Ford, Jr. predeceased him. He is survived by siblings Lavern McClendon, Constance G. Starks, Renee I. Falwell (Jimmy), Regina M. Saizan (Michael), Cynthia N. Gould, Anthony M. Gould (Ollie), Dale (Debbie), Bernard (Gina) and Cornell (Diann) Ford, Gloria Lewis and Carolyn Williams; and a host of nieces and nephews. A viewing will be held in the Pope Funeral Homes Forestville Chapel, 5538 Marlboro Pike, Forestville, Maryland on April 18, 2022 at 10:00 a.m. with funeral service at 11:00 a.m. Interment will follow in Fort Lincoln Cemetery, 3401 Bladensburg Road, Brentwood, Maryland.

David Ford-Gould, of Washington, DC, passed away on April 9, 2022 from meningitis. He was born in Washington, DC on July 14, 1951. From the ages of four to nine, he lived in Spotsylvania County Virginia, where he attended John J. Wright Consolidated... View Obituary & Service Information

The family of David Ford-Gould created this Life Tributes page to make it easy to share your memories.

David Ford-Gould, of Washington, DC, passed away on April 9,...