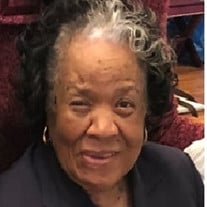 Carrie H. Greene February 8, 1936 - February 20, 2021 Carrie Harris Greene was born February 8, 1936 in Charleston, WV to William James Harris, Sr. and Roberta Garland Harris. As the oldest of the "Harris clan", she was a protector of her siblings. You rarely saw Carrie without one of her brothers or sisters. As a child, Carrie was happy and full of fun and laughter. She liked to roller skating and was a Girl Scout. Carrie developed a unique fondness for ironing clothes and used it to relax. It was not uncommon to see her ironing sheets or jeans. At an early age, Carrie displayed a love of learning, studying and helping others. She attended public schools in Kanawha County and graduated from Garnet High School in May of 1954. Carrie matriculated from West Virginia State College where she received a Bachelor of Arts in Education. In 1974, Carrie earned a Master in Arts in Teaching from Trinity College. While standing in line to register for classes at West Virginia State College, Carrie met a tall, handsome young man name Richard Greene from Charlestown, WV. That chance encounter turned in a lifelong love story as they married on July 25, 1958. Together, they were blessed with four children-Margot, Richard, Langley and Michael. Richard and Carrie were a perfect match-weathering life's storms together, growing together and nurturing their family in the ways of the Lord together for 52 years until his passing in 2011. Carrie's greatest joy was being a mother to her children, as well as a loving grandmother. She was devoted, but strict, and worked tirelessly to help her children become the best versions of themselves. Carrie was actively involved in their lives and did everything to provide them a "life full of memories". She was proud of them all and would share their accomplishments with anyone who would listen. Carrie turned her passion for education into a lifelong career. For more than 35 years, she taught 5th and 6th graders in DC Public Schools at Moten, Amidon-Bowen and Syphax elementary schools. Carrie was not just a "teacher" to her students, but a mentor, cheerleader, coach and often a mother figure. Carrie deeply cared for each of her students and motivated them to achieve their dreams. She went above and beyond to help her students and could always be found in her classroom late into the evenings tutoring. Every year, she would reward her students with a pool party at her home. Carrie prided herself in having a personal relationship with each of students and never forgetting a face. In 1995, Carrie retired from the DC Public school system, but often returned as a substitute teacher. Carrie was a proud member of Delta Sigma Theta Sorority, Incorporated. She was initiated into the Sorority in 1957 at the Alpha Delta Chapter. Carrie believed that membership was a lifetime commitment. She was an active member of the Washington DC Alumnae Chapter for more than 40 years and she served on various committees. At an early age, Carrie accepted Christ as her Lord and Savior and was baptized at the Glorious Church of God in Christ in Charleston, WV. She attended Bible Study regularly and played the piano for the church choir. Carrie was a faithful member of Cornerstone Baptist Community Church in Temple Hills, MD for nearly 50 years. She was a member of the Sunday School and actively served on the Greeters and Women's ministries. Carrie would rarely miss a service and her quiet presence could always be felt. She was a woman of undeniable faith. Carrie relished her relationship with the Lord and eagerly shared her testimony-through her smile, her energy and her giving heart. Carrie departed this earthly life peacefully on Saturday, February 20, 2021 at her home. She was preceded in death by her husband, Richard A. Greene; her parents, William and Roberta Harris; brothers, Clifford Harris and Garland Harris; sister, Mary Harris; son, Langley Greene, and several special family members and friends. Left to cherish her memories are her three children, Margot Ramsey (Albert) of Baltimore, MD, Richard Greene of Temple Hills, MD, and Michael Greene (Angel) of Austin, Texas; five grandchildren, Nicole Jordan, Damien Ramsey, Domonique Ramsey, Amber Tann and William Greene; six great-grandchildren, Kiya Jordan, Chanelle Tabron, Taylor Traynham, Thomas Harris, Alexis Jordan and Alexandria Gillison; three sisters, Barbara Gore of Charleston, WV, Cora Squalls Moreland (Daniel) of Hanover, MD, and Vivian Bradley (Leroy) of Greenbelt, MD; a brother, William "Billy" Harris Jr. (Joan) of Hartford, CT, and a host of nieces, nephews, cousins, godchildren and friends. Homegoing services will be held on Friday, March 12,2021 at Henson Valley Christian Church (1900 Tucker Rd, Fort Washington, MD 20744). The viewing will be held from 9 a.m. to 11 a.m. The service will begin promptly at 11 a.m. with an interment immediately following at Cheltenham Veterans Cemetery. The service will be live streamed at www.carriehgreene.com. Funeral services have been entrusted to Pope Funeral Home.

Carrie H. Greene February 8, 1936 - February 20, 2021 Carrie Harris Greene was born February 8, 1936 in Charleston, WV to William James Harris, Sr. and Roberta Garland Harris. As the oldest of the "Harris clan", she was a protector of her... View Obituary & Service Information

The family of Mrs. Carrie Harris Greene created this Life Tributes page to make it easy to share your memories.