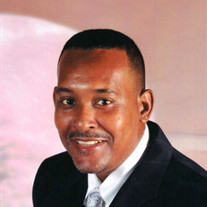 Carl Lee Whitfield, Jr. (aka Peanut) was born on September 25, 1971 in Washington, DC to Carl Lee Whitfield, Sr. and Barbara Jean Whitfield. He departed this life on September 10, 2021. He was educated in the District of Columbia public schools and married Joy D. Brown on July 14, 2001. Carl was known for his infectious and unapologetic sense of humor. His fun-loving personality was hard to ignore, and was one of the many things that drew people to him. In fact, he could find joy and prompt laughter in nearly any situation, really any situation. No matter what he had endured each day, he always found a way to make the mood lighter. His signature laugh and jokester personality was sure to brighten your day. Carl was preceded in death by his father Carl Lee Whitfield Sr, two brothers Carl Glen Whitfield, Rodney Deon Whitfield and one sister Barbara Denise Whitfield. He is survived by his wife Joy Whitfield, one son Christopher Adams, mother Barbara Whitfield, four brothers Michael Whitfield (Delta), Terry Whitfield, Tyrone Whitfield and Kenneth Whitfield, five nephews, three nieces, three brothers-in-law, four sisters-in-law and a host of aunts, uncles, cousins and friends.

The family of Carl Whitfield, Jr. created this Life Tributes page to make it easy to share your memories.