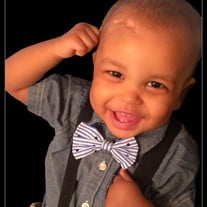 Blake Vince Payne affectionately known as "Blakey,” was born on March 14, 2019 in Arlington, Virginia to parents Kedric and Rene Marsh Payne. He immediately began spreading joy and love to those who met him. His warm smile, playfulness, and bright eyes melted family and friends’ hearts. More importantly, Blake inspired those who knew his journey. His strength, endurance, and enjoyment of life showed an extreme resilience that encouraged those around him daily. In the face of many challenges, Blake always wanted to engage in his favorite activities. He loved reading, especially his favorite books by Sandra Boynton. He also enjoyed signing and listening to music. He had a wide range of top picks, including Mozart's Serenade no. 13 and Bob Marley's "Who the Cap Fit." He began learning sign language at an early age and then started teaching his parents new signs that he invented. He spent many hours bossing his parents around with his signs for going outside, driving his electric car, pouring water in cups, playing music, and brushing his teeth. And like a little angel should, Blake developed the habit of randomly clasping his hands together in prayer formation, closing his eyes at various times throughout the day, reminding his parents to pray. Blake’s timing was always perfect. When he was not making requests with signs, Blake's favorite word was "no". However, Blake never said "no" to snuggles with mom, peek-a-boo, tickle time, Mickey Mouse, Sesame Street, or Mira the Royal Detective. Blake gained his heavenly wings on April 14, 2021, after a brave year and a half battle with brain cancer. Blake's life was short but impactful, as demonstrated by the outpouring of love, tributes, and prayers in his honor from family, strangers, medical professionals, and countless others touched by his story. Blake was preceded by maternal grandfather Vincent Marsh. Blake is survived by his mother Rene Marsh Payne and father Kedric Payne, his grandmothers Elaine Marsh, Faye Payne, Trina Payne, grandfather John Payne, aunts Michelle Marsh and Leesa Payne, cousin Nicholas Mason and many others family members. In lieu of flowers Blake's family asks that you make a donation to the Pediatric Brain Tumor Foundation in Blake's honor.

Blake Vince Payne affectionately known as "Blakey,&#8221; was born on March 14, 2019 in Arlington, Virginia to parents Kedric and Rene Marsh Payne. He immediately began spreading joy and love to those who met him. His warm smile, playfulness,... View Obituary & Service Information

The family of Blake Vince Payne created this Life Tributes page to make it easy to share your memories.