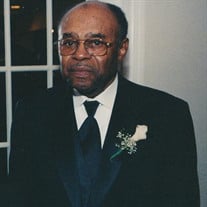 The exemplary life of Archie Smith, Jr began in Wayne County, Mount Olive, NC on August 5, 1926, and he departed this life on February 1, 2022. He was the oldest of five children born to Archie Smith, Sr and Maybel Wynn Smith. Archie entered military service immediately after graduating from Carver High School in 1945. He enlisted in the US Army, served during World War II, and was stationed in Europe. Shortly after his return from military duty, he married Blonnie M Washington on August 4, 1951. They loved to laugh together and spend time with their family during their 70 devoted years of marriage. From this union they were blessed with two sons, Archie Lamont “Junior” and Douglas Edward. Archie pursued a career at the Department of Navy, where he retired in 1990 as a Supervisor under the Navy Reactor Atomic Energy Department. Archie’s service in the Church began at an early age at the Shady Grove Baptist Church, Mount Olive, NC. After relocating to Washington, DC in 1951, he became affiliated with the New Samaritan Baptist Church, where he served as Chairman of the Trustee Board until 1991. Then God called him in 2001, not only to the Trustee Chairmanship, but also to serve as a Deacon at the Old Ship of Zion Missionary Baptist Church, where he served honorably. Then God called him to the Body of Christ Christian Church where he and his wife served until his death. His Christian love was shown in every aspect of his life. He has touched so many lives spreading his positivity and giving the most human gift… the gift of love. Archie was predeceased by one son, Archie Lamont and one daughter, Linda Bond. Archie leaves to cherish his memories: a devoted wife, Blonnie W Smith; one son, Douglas Smith; one sister, Vinette Hagans; one daughter-in-law, Phyllis Smith; one sister-in-law, Alice Smith; six grandchildren; several great-grandchildren; a host of nieces, nephews, cousins, and other relatives and friends Services will be held Friday February 11, 2022 at Pope Funeral Homes Forestville Chapel 5538 Marlboro Pike Forestville MD 20747 Viewing 2:00 pm Service 3:00 pm Interment Cedar Hill on Monday February 14, 2022 at 10:30 am Also, here is a link to a tribute video: https://drive.google.com/file/d/1pBE8wNUuC0CoMkRAVMk0FL3pkMRjrvXk/view?usp=sharing

The exemplary life of Archie Smith, Jr began in Wayne County, Mount Olive, NC on August 5, 1926, and he departed this life on February 1, 2022. He was the oldest of five children born to Archie Smith, Sr and Maybel Wynn Smith. Archie entered... View Obituary & Service Information

The family of Mr. Archie Smith, Jr. created this Life Tributes page to make it easy to share your memories.