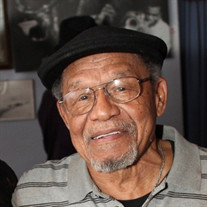 Alonzo Shelton Williams was born February 19,1937, in Washington, DC to the late Harry Alonzo William and Catherine (Kitty) Street. Al, as he was affectionately called received his formal education at Springarm Senior High School in Washington, DC where he graduated in 1955. Alonzo enlisted in the US Air Fore in 1956. In 1960 he received an honorable discharge after serving his country. Alonzo went on to further his education at Federal City College in Washington, DC, where he studied electronics. Alonzo went on to operate his own taxicab service, while also running a small television repair business. During his life span, Alonzo met and married Blanche Brown in 1967. At the time of their marriage, Alonzo had two sons Alonzo Corbett and Kevin Williams. This cherished union produced two children Shelton Scott Williams and Patrice Regina Williams-Robinson. His children had always been a source of great pride and joy. Alonzo was loved by his family and friends. He loved listening to live jazz bands, playing Bid Whist and going to the horse races. He loved to spend time with his family and each of his grandchildren. Alonzo had a very special relationship with each one of his grandkids. He especially cherished the time he spent with his youngest granddaughter Zameer, whom he often affectionately called "The Sponge". Alonzo entered into eternal rest on Monday, June 14, 2021. He was preceded in death by his wife Blanche Williams, his son Kevin Williams, his beloved and only daughter Patrise Williams-Robinson; his sister Thelma and brothers Louis, Leon and Harvey. Alonzo leave to cherish his precious memory his devoted sons Shelton Williams (Arnicia) and Alonzo Corbett; his loving grandchildren Kelley Williams, Shawn Williams, Niaya Williams, Cori Robinson, Zameer Williams and one great grandson Marquis Burden. He also leaves his longtime devoted companion Sharon Winget whom he shared his love for live jazz and crab cake dinners, along with a host of close family and friends.

The family of Mr. Alonzo Shelton Williams created this Life Tributes page to make it easy to share your memories.