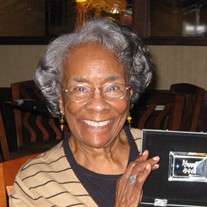 Alice Elizabeth Pope Patterson Jones was born Oct. 27, 1924 in Washington, D.C., the oldest child of Hassie Pope Sr. and Edna Brooks Pope. She got company two years later, when her brother Hassie Jr. was born. Alice and her family lived on Wallach Place, NW, in the U Street Corridor, with extended Pope family members. She also spent a lot of time with her maternal grandmother, Emma Hill. Alice's immediate family was expanded two years later when her brother, Hassie Jr. was born. Alice attended Harrison Elementary School, Garnett Patterson Junior High, and a year at Dunbar Senior High, before a severe case of athlete's feet sidelined her for a year. When she recovered, she transferred to Cardozo Senior High School, graduating in the class of 1943. Soon thereafter, Alice married William Patterson and had a son, William Albert (Buzzy) Patterson, who predeceased her in 2021. The marriage ended in divorce and the elder Patterson died in 1962 of a massive stroke. In 1953, Alice married Melvin C. Jones and moved to the Rosedale neighborhood of Northeast Washington. There they welcomed a daughter, Jacqueline V. (Jackie) Jones. In 1957, they moved to the Petworth neighborhood of Northwest D.C. Melvin died of lung and brain cancer in 1990. In 1997, Alice moved in with daughter Jackie, who had become a journalist. Alice was a diligent homemaker, almost legendary for the cleanliness and orderliness of her home. She kept her purse the same way. She even folded her money in such a way that she could reach in her wallet without looking and select the exact denomination bill she was seeking. Her home was often the neighborhood hangout for her children and their friends, who often turned to Alice for advice regardless of whether Buzzy or Jackie were present. When Jackie traveled for work or pleasure, a group of friends known as Team Alice, would pick up Alice for lunches dinners, movies, and/or drinks. In her later years, Alice traveled to the Caribbean, Alaska, France and to several places in the U.S. to visit Jackie, who moved around extensively during her newsroom career. Alice also was a doting grandmother and was more than happy to play the role for couples whose parents or grandparents weren't in the area to help spoil the children. In addition to grandson Tony Jones (Katasha) and great-granddaughters Kelsi and Kourtney, Alice is survived by a large band of informally adopted children and grandchildren, including Helene and Nora Douglas; Amani, Tariq, Saniya and Nia Gibbs; Christopher and the late Matthew Green, and Ariane Cottman. Alice also is survived by many special family members and friends, including childhood friends Theresa Johnson and Margaret Scales; godchildren Leon and Lisa Stafford, the Bradford and Pope families, and others too numerous to list.

The family of Ms. Alice Elizabeth Jones created this Life Tributes page to make it easy to share your memories.